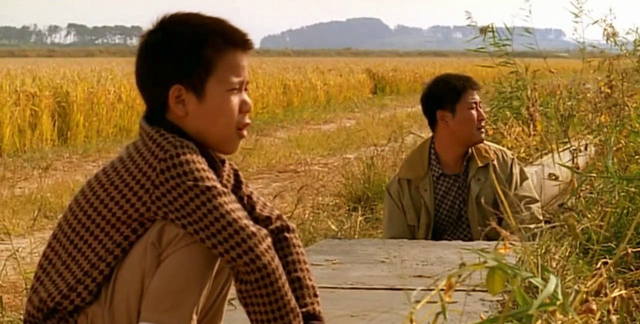 Bong Joon-ho’s sophomore film mixes the dark humor of his first film with a serious crime drama and a period piece and it’s a masterful blending of mood and tone into a chilling examination of evil and human cruelty. It still carries with it the dark humor that Bong Joon-ho is known for but while tackling the most grounded material in his body of work.

Small town detectives Park Doo-Man (Song Kang-ho) and Cho Yong-koo (Kim Roe-ha) find themselves in the midst of a series of murder cases targeting beautiful young women. Their usual techniques of police brutality and gut instincts get them nowhere which makes them all the more resentful when detective Seo Tae-Yoon (Kim Sang-kyung) comes in from the big city of Seoul to lend aid to the case.

The setup is familiar territory and could quickly become routine, but it’s the tone of the piece that makes many moments play out in interesting and unique ways. The film starts with this bumbling sense of idiocracy as the detectives are in over their heads and ill-equipped to investigate these cases. They also try to frame the crime on the first suspect they find but to little avail.

As more murders happen, there’s a dark humor gives way to a growing sense of disgust from everyone involved in the case. From the onset both the killer and the police are brutal in his methods, but each action feels more and more transgressive. Characters once unphased now become shocked at what they’ve seen and become in the process of the case.

By reflecting so much upon chasing after evil, these detectives become the things they hate, that looking into the darkness only spreads more darkness into their souls. Women and drink may sate the demons inside for a while, but evil eventually has its day.

Memories of Murder mixes dark humor with a grimy sense of unease. Morally dubious heroes, a world in decay, and a bumbling sense of incompetence in the face of an unknowable evil makes this the standout work in Bong Joon-ho’s career. It lacks some of the shocks and thrills of his other films, but comes across as his most complex and thematically holistic work.