Spoiler Alert: The film is discussed at length.

Looking over the last decade, there’s one film that stands out to me that begs to be considered a cult classic. From the flashes of color draped across the brutalist architecture to the simple action story spanning one day, Dredd feels in the vein of an old ‘80s sci-fi flick that might have come out alongside Predator or RoboCop. The film oozes with a supreme sense of pulp and certainly digs into the roots of its comic book origins.

Dredd initially appears as a simple exercise in exploitation and action filmmaking, a cinematic indulgence, a spectacle of violence. However, this ignores the strength of the writing by Alex Garland and the story’s interesting themes of justice and mercy.

Judge Dredd (Karl Urban) is a veteran Judge in Mega City One, a dystopian future world where Judges act as the beginning and end point of the law, issuing summary judgment at the scene of the crime. He is tasked with assessing Anderson (Olivia Thirlby), a rookie on her first patrol. What starts as a simple murder case esclates into a full investigation of the Mawmaw Clan and the addictive substance they’ve been producing called slo-mo.

Dredd and Anderson are locked inside the apartment block, throwing Anderson into the deep end of a pool flooded over in the worst society has to offer. Dredd begins drilling her on the various judgements facing the people they encounter along the way. To be a Judge is to adhere to the letter of the law and dish it out judiciously. There would be a lot of ethical issues with a real-world implementation of such a judicial system, some of which the film explores, for the purposes of the film, Anderson and Dredd are presented as characters who uphold justice. 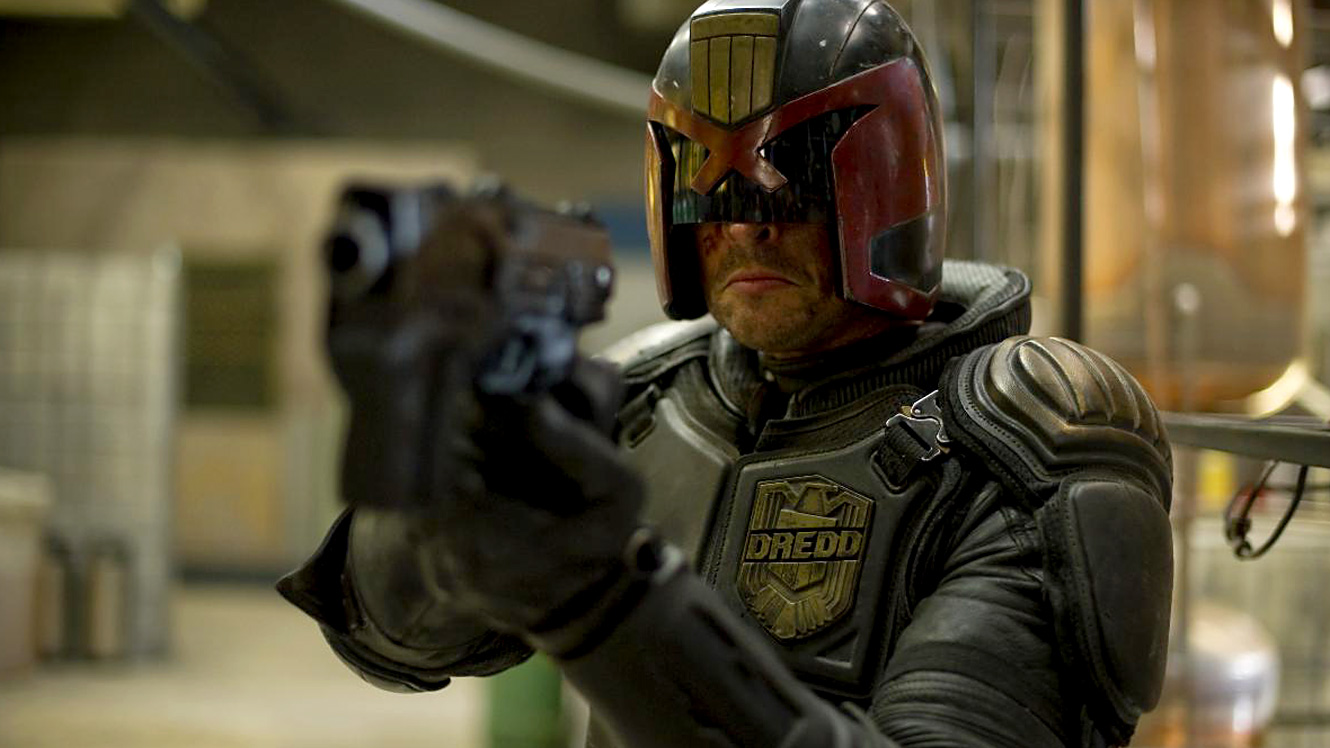 It’s important to remember that the original Judge Dredd comics came from the UK during the rise of Thatcherism and in many ways is a satire of conservative moral absolutism and nationalism that Thatcherism represents. Judge Dredd exists as a satire of the facist state and facist police. Everything in the film is cranked up to extremes. The villains are flamboyantly and unquestionably bad but the police are cold and mechanical. Dredd perceives himself as the good guy of the story but the film keeps him at arm’s length as a character, physically placing him behind a mask. The audience empathizes more with Anderson who doesn’t use her helmet because it gets in the way of her psychic abilities.

There are a lot of people receiving justice in Dredd. The penalty for attempted murder of a Judge is execution, meaning that the Judges have immunity to kill whoever shoots at them, but Dredd and Anderson often engage fairly and even give oppertunities for would-be attacks to disperse. They do not have bloodlust, but do enact the law. Is the punishment always fair? Perhaps not, but it is the law. 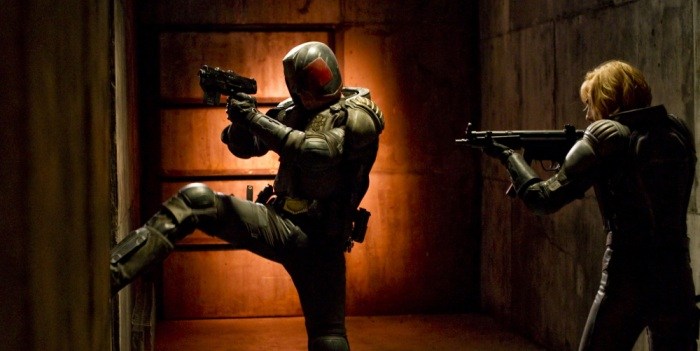 In a pivotal scene Dredd and Anderson walk through the aftermath of a gunfight between Dredd and armed criminals. One struggling survivor looks up at Anderson. Dredd reminds her the penalty for attempting to kill a Judge is immediate death. She points her gun to his head and shoots.

Fast-forward to a later scene where Dredd and Anderson barge in on a woman to hide from gang members. Anderson glimpses a photo of the woman and a child with the man she killed. Yes, he attempted to kill a Judge, but that doesn’t stop Anderson from having a moment of hesitation and regret. Maybe this man wasn’t a criminal but forced to participate alongside a group of thugs to hunt down the Judges. 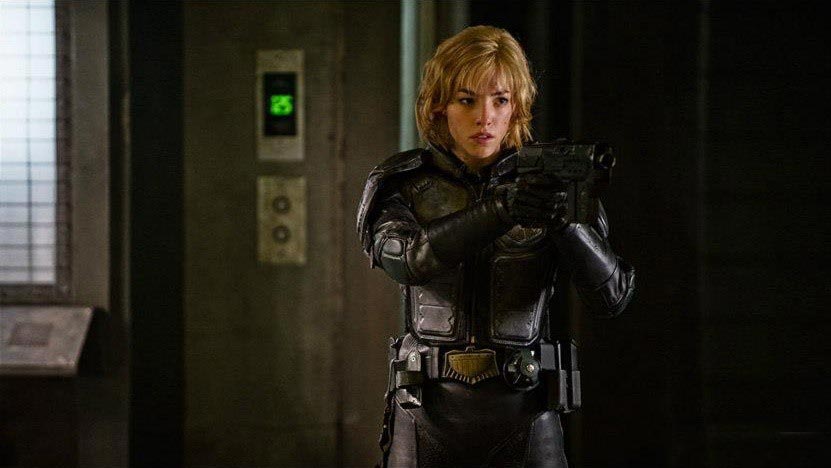 It is possibly this moment that leads Anderson to a surprising act of mercy later in the film. When Anderson and Dredd catch up with the clan techie (a bug-eyed Domnhall Gleason), she scans hir mind with her psychic abilities and sees that his participation in the clan’s criminal behavior is done under duress and out of fear. She decides to let him go even though Dredd warns her that to not issue him judgement will cause her to fail the test.

Anderson replies that she’s already failed and that letting him go might be the only good thing she has done that day. For Anderson, showing mercy to someone who deserves judgement in the right situation can be the greatest good possible. To not give someone what they deserve is to exercise discernment in applying the law instead of a strict, unwavering adherence to the letter of the law such as the one Dredd has. 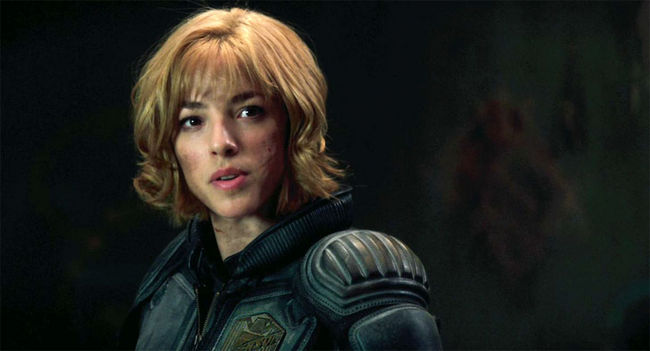 From the onset Dredd seems underwhelmed with Anderson. When he is introduced to her, he’s told she was on the fringes of passing the test, to which he replies that means she failed the test. Dredd’s worldview is black and white, good and evil, just and unjust. It’s a moment of growth when in the final moments of the film he shows his own mercy and passes Anderson. Dredd recognizes that even though she failed the test that does not mean she will be a bad Judge or that she was wrong to spare someone who deserved judgement.

The world of Dredd is an unjust world, one overrun with many people doing evil and selfish things. The desire for justice is a good thing, especially in an unjust world. However, what that justice looks like and how it is applied is not always clear. Dredd’s unwavering and inflexible worldview is what makes it hard to empathize with him as a character. He may be cool to watch, but wanting to be him or even admiring him as a hero does not seem to be the desired effect of the film. It’s Anderson’s journey into discerning when to be just and when to be merciful that drives the film and makes Dredd a thoughtful examination of how to apply justice in a world where good and evil are not clear binaries.