1.01 Simpsons Roasting on an Open Fire 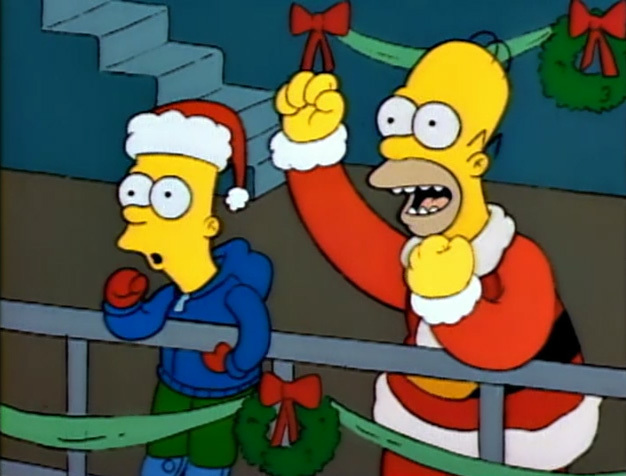 I’d only seen one episode of The Simpsons before I decided to take on the project of watching the show from the beginning. I doubt I’ll stick with the show until the end, mostly because the show may outlive us all, but I’m aiming to reach at least the end of season 9. Even having seen a random episode, I was not prepared for this first episode.

Christmas is almost ruined for the Simpson family when Bart gets a tattoo. Marge pays to have the tattoo surgically removed, spending all the Christmas money Homer saved up all year. Marge is holding out for Homer’s bonus check but when it’s announced that check won’t be coming this year, Homer decides to secretly take on a side-gig as a mall Santa. Meanwhile Lisa tries to defend her father’s honor as Marge’s sister belittle how little Homer is around during their holiday visit.

Homer threw me for a curveball. I always pictured him as a harmless buffoon, but here he’s got a short temper and verbally abusive. By the end of the episode he’s a bit more likable as he’s spent his time enduring snooty kids to try to give his family a great Christmas.

Bart and Lisa are the two characters that pop off right from the start. Lisa is the brainy one with deep insight (the scene where she sweetly chides her aunts for belittling her dad) and Bart is the kid always getting in trouble (the aforementioned tattoo which starts the whole conflict of the episode).  Marge is sidelined here and doesn’t do much of anything, which makes her the least interesting of the quartet of characters.

The animation is a lot cruder than my memory of what I’ve seen. The colors are dull giving it a bad Instagram filter look. Maybe it’s poor preservation work or perhaps it’s the constraints of a tight budget to make a pilot episode. I’m leaning more towards the latter as the animation cuts corners with a plethora of repeating and reused frames of animation.

Simpsons Roasting on an Open Fire is an okay episode with a couple of great moments here. Lisa telling off her aunts for digging at her father and Santa’s Little Helper show both the funny and sweet side of this show within about a minute of each other. There’s also the great self-aware moment where Bart talks about how every poor kid gets a Christmas miracle on TV so he expects one as well. This episode shows promise and potential but I’ve got some major reservations already. 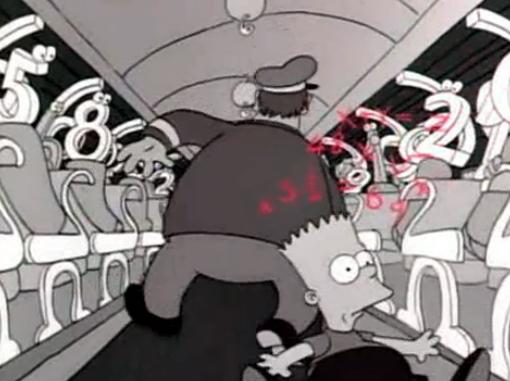 Bart cheats on an IQ test and gets placed in a school for smart kids. Initially, the status as a smart kid goes to his head but once among the smart crowd he finds himself even more of an outcast than at a regular school. By the end of the episode he comes clean, admits his cheating and returns to his regular school.

The highlight of the episode is a sequence in which Bart imagines one of those classic “if a train is heading” math problems in his head. It’s a flash of figures and numbers and a great visual treat as it shows how confusing these problems can be by layering on the numbers until it becomes too much.

I’m starting to come around to Homer a little bit more. I’m seeing him now as a self-aware play on the abusive father sitcom archetype. He’s akin to Fred Flintstone although Homer comes across as a lot more harmless. He never physically harms people. Homer is a dog: all bark and no bite.

This episode is humdrum. There aren’t too many jokes that stick the landing and the overemphasis on Bart marginalizes the interesting family dynamics which could have been played up since Lisa is an unrecognized genius in her family. 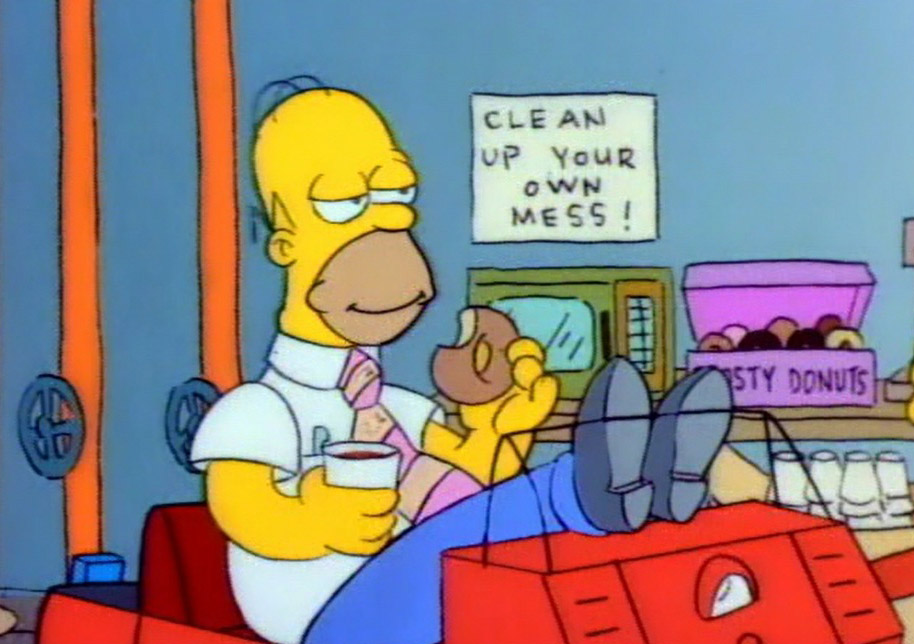 I don’t have much to say about this episode. Bart takes a field trip to the nuclear power plant Homer works at only to distract his father into causing a disaster. Homer then decides to protest the plant for his own personal reasons but soon becomes a man of the people. Then the owner of the plant Mr. Burns reaches out with a deal.

The introduction of Mr. Burns makes this a notable episode, but the structure of the episode demonstrates sitcoms at their worst. The drama here of Homer not having a job is undercut by having to resolve it all in a 25 minute runtime. It comes across rushed, especially the final couple of minutes of the episodes.

I do recognize that The Simpsons is self-aware of the structures and conceites of television but that doesn’t stop it from having the same weaknesses. The perpetual need to return to the status quo by the end means that these arcs come and go way too quickly. It’s one of the reasons I have a hard time getting into the genre. 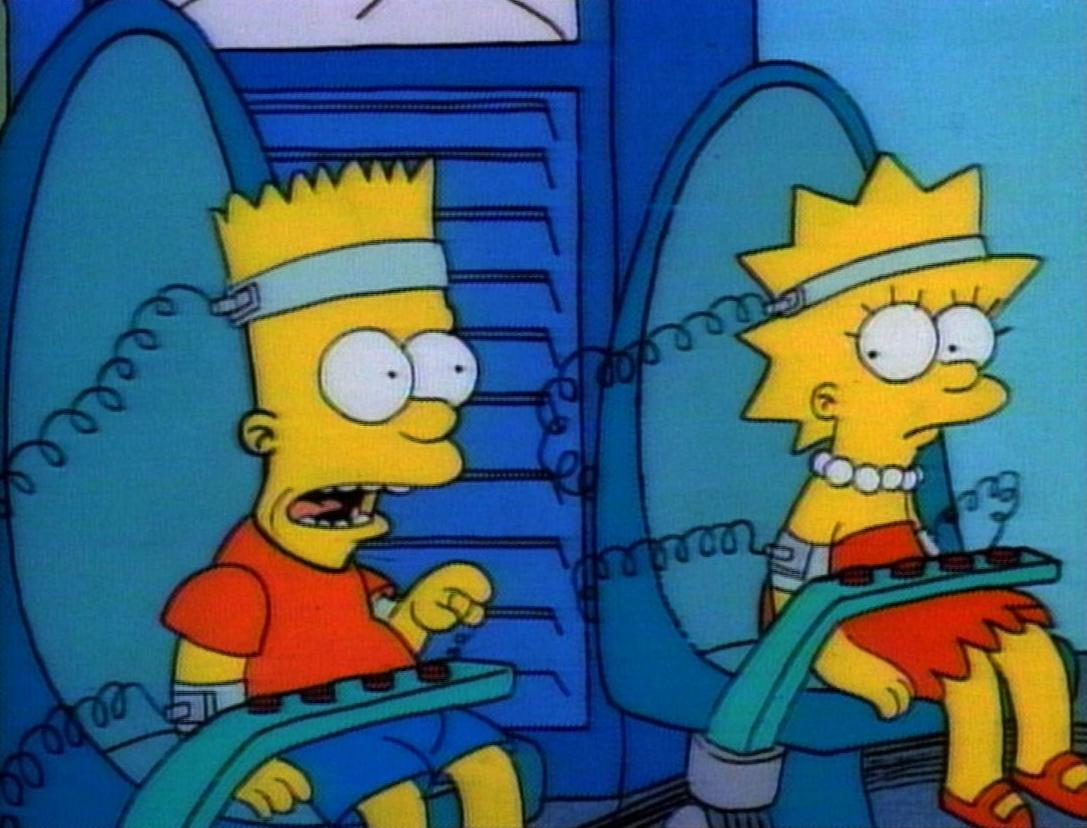 A family work picnic at Mr. Burns’ house turns into a social nightmare for Homer when the Simpson family embarrasses him in front of his boss. A TV ad inspires Homer to take the Simpsons to family therapy. The only problem is they don’t have enough money so Homer sells off the TV so they can go to therapy.

This might be the first great episode of the show. There’s a lot going on in the 25 minute runtime that explores the nuance of how the Simpson family functions. It starts with Homer witnessing how great all the other families appear to be, demonstrating how comparison is the thief of happiness, starting the arc of Homer trying to solve a problem that may not even exist.

During therapy, it becomes apparent that everyone blames Homer for their problems. This aggression quickly turns into some great physical gags when the family starts beating each other with foam swords and zapping each other in what is supposed to be an empathy building exercise. It’s surprisingly dark but since The Simpsons is animated, it makes it easy to pull off the violence with exaggerated expressions and unrealistic looking characters.

The episode resolves with a great twist of fate as Homer demands the failed therapist give him double money back guarantee as promised in his ad for a failed session. Now with twice the money in hand, Homer resolves to take things back to normal, only this time the family will end up with a bigger TV. It’s a great inversion of expectations because by the end The Simpsons haven’t learned any lesson but Homer ends up as a hero in his family’s eyes. 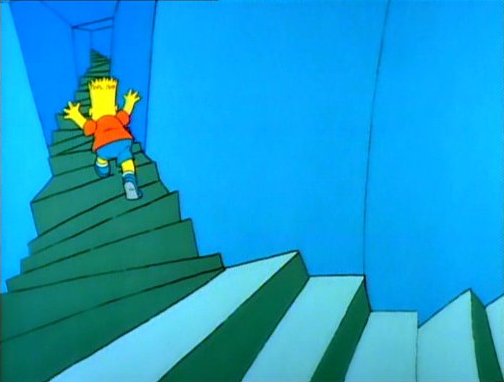 Bart finds himself the victim of the school bully when he stands up for Lisa. After taking pounding after pounding, he goes to his family for help only to end up in an army surplus store planning war with his grampa and the store clerk against Springfield’s premier bully. Bart enlists an army of children to help him in his campaign to end the bully’s reign of terror.

The animation team is given another opportunity to flex with a sequence where Bart has a nightmare about the bully. The play on scale and perspective as well as the oblique angles give it a German Expressionism feel and allow for some playful moments that demonstrate how effective animation can be at capturing dreamlike states. Bart’s nightmares make for the most creative moments of the show.

Family dynamics also get a moment to shine as Marge and Homer differ on how to deal with the bully. Marge says the bully should be met with care and sympathy and involve adults while Homer says the bully should be beaten by any means necessary. Homer also speaks of the code of the schoolyard. The episode takes it to the extreme, escalating a relatable, everyday situation into a mock war.

This is a solid episode. It’s not as funny as the previous one, but it’s tightly structured, has some funny moments of subversion, and plays into the unusual nature of the Simpsons family. War is hell but so is the schoolyard. 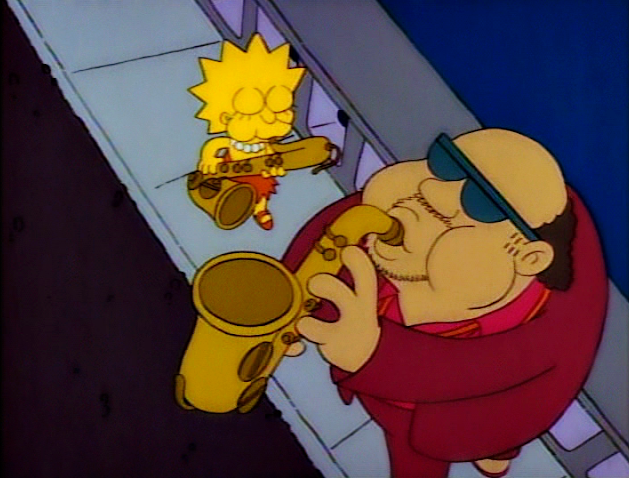 Lisa finally gets her moment to shine. Faced with the troubles of life, Lisa gets a case of the blues. She gets it so bad that she begins playing the blues, much to the annoyance of Homer. Marge tries to be emotionally supportive but draws the line when Lisa goes out in the middle of the night to meet up with some strange street blues singer. Meanwhile, Home tries to defeat Bart in a fighting video game.

I’ve a soft spot for all things blues and jazz so this episode made me smile a lot. As an episode of The Simpsons, it’s not the best of the lot but it’s definitely one of the better ones of this batch. Moaning Lisa develops both Lisa and Marge as characters and taps into the real problem some kids have of not feeling happy but being told to fake it because of societal pressures from family and friends. Marge and Lisa get some wonderful moments together.

However, it is a bit creepy that Lisa goes and hangs out with some blues playing bum. It helps that we’re in the cartoon world here because no way would this work in a live-action situation without raising a lot of pedophilic vibes. Here, it’s played off as friendly and innocuous but still it’s weird to see a kid go off in the middle of the night to meet a blues playing stranger.

The subplot with Homer and Bart is entertaining. The actual fighting game makes for some cool animation sequences and it provides most of the humor of the episode because there aren’t a lot of laughs to be had when you’re singing the blues. I also love that Homer is the kind of dad who wants to beat his son at a video game to prove he’s not an old man. It’s such a relatable yet dumb desire. 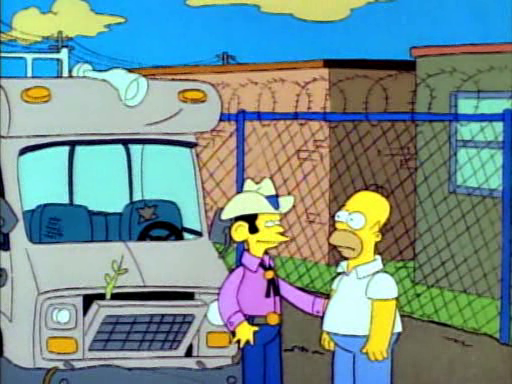 Flanders gets an RV, upstaging the Simpsons and making Homer feel inadequate. In a case of keeping up with the Flanders, Homer insists the family gets an RV. In typical Simpsons fashion, it ends up being the worst RV imaginable, barely functional and extremely ugly. The condition of the RV hardly matters because it’s not long before the RV is destroyed in spectacular fashion and the Simpsons are left abandoned in the middle of the wilderness.

This episode follows three different plots: the boys “surviving,” the girls domesticating the wilderness, and Maggie falling in with a group of bears. Each plot thread is fun enough, the Maggie one being the highlight of the episode. There’s nothing particularly exceptional with each one of these until the final act.

The last act involves Homer being mistaken for Bigfoot by the campers which leads to a massive media zoo as the rumors fly, news coverage goes ballistic, and Homer becomes the source of scientific study and debate as a potential missing link. It’s a nice bit of commentary about how the media turns the dumbest things into a media circus as well as a jab at how dumb Homer is.

The past couple of episodes I noticed an improvement in the animation. There was more creativity in design implemented as well as better drawing and animation. It’s still not the best looking animated show, but it feels passable now.  I’m not finding myself distracted by the animation quality anymore and think it looks good for an animated show given that there were few animated shows aimed at adults during this time.