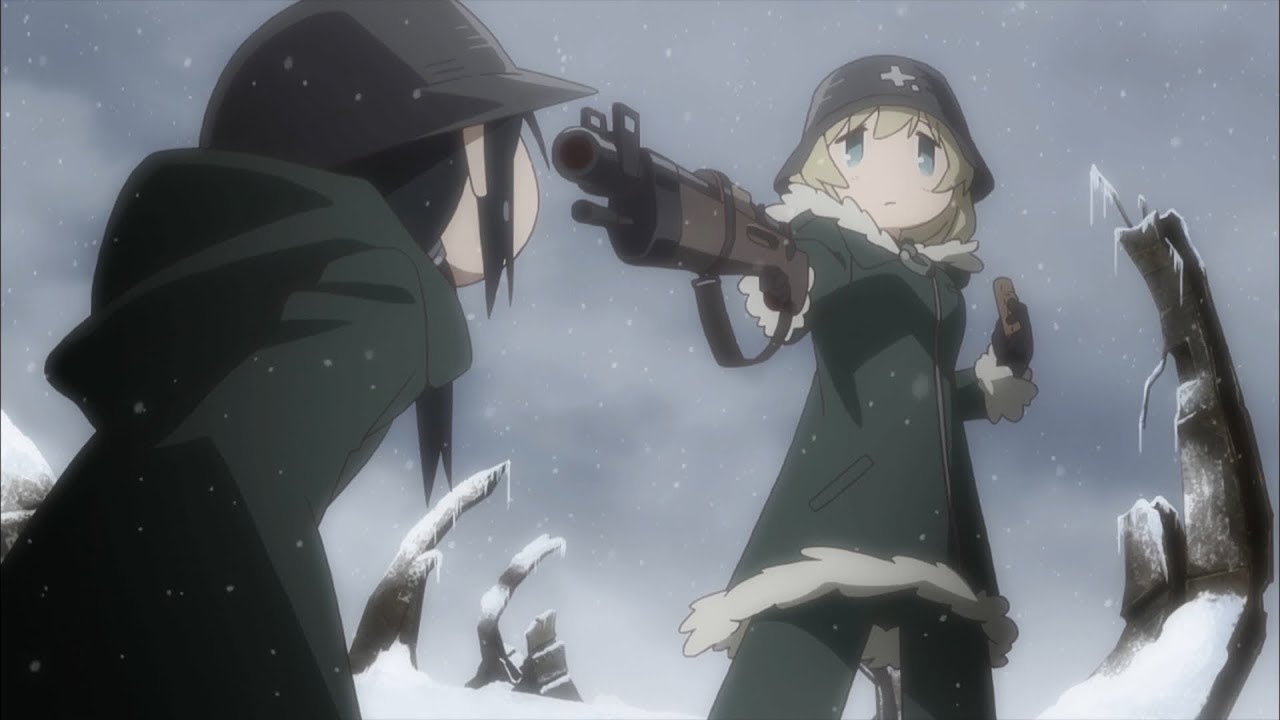 Two girls ride a Kettenkrad through the ruins of a war-torn city in a nondescript time. Chito drives the Kettenkrad while Yuuri is responsible for the firearm they carry as well as eating the food. Yuuri is the more impulsive of the two, often given over to her feelings and whims while Chito takes the time to think through the situation.

As a high-concept, this works for a number of reasons. First, experiencing the aftermath of war from the perspective of the children allows it to pontificate on the senselessness of war while also rooting it in basic human behavior. Yuuri asks Chito about what war is and doesn’t quite understand it until they reach the last piece of their ration pack and can’t decide who gets it.

The undefined location and the setting after the war gives the story a chance to focus more on atmosphere while meandering through the aftermath of battles instead of engaging in the thrilling spectacle of most animes about war. It’s more pensive and quiet, soaking in the calm after the storm and trying to make sense of why this entire city is now in ruins.

Like most anime I end up watching, after the first episode I’m left feeling conflicted about the art style. Much of the look is realistic and grimy with a heavy industrial and post-WWII reconstruction look. However, Chito and Yuuri are drawn in the Kawai style as these cutesy girls you might see in a more comedic anime. There are comedy elements here, and so far it’s a show you could watch with kids, but that juxtaposition of the childlike against the realistic on a purely visual level is jarring. 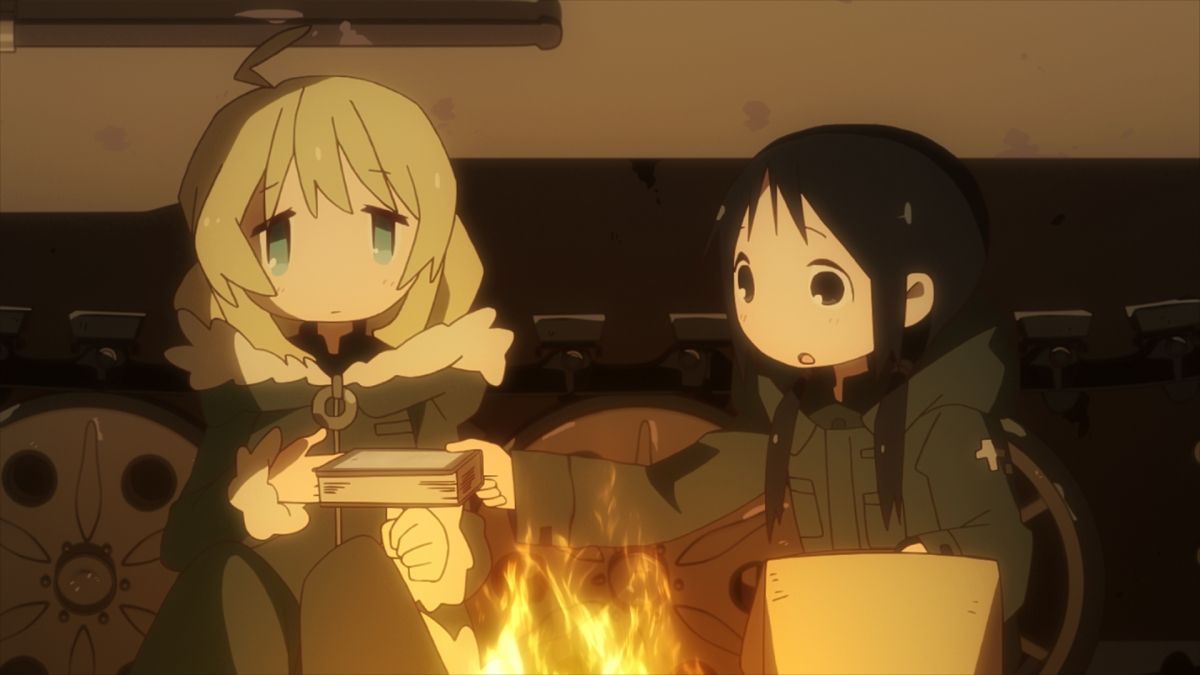 You know this is an anime because there’s a bath episode. Before you get your mind in the gutter, remember these are prepubescent girls and this isn’t like the typical anime bath episode with sexual humor and innuendos. It’s played up as a straight, relaxing bath. Then they travel more and Chito and Yuuri have a fight about a book when Yuuri uses it for fuel for the fire. The next day is laundry day and they encounter a fish which they decide to eat.

Girl’s Last Tour vibes as this meandering story through the remnants of destruction. There’s interpersonal conflict between the characters from time to time but for the most part this is a show about following these characters doing mundane, everyday things: bathing, sitting around a fire, sleeping, doing laundry, and eating. It’s a survival tale, but not bleak in tone. If anything, it revels in the simple sensations and pleasures of a hot bath or a warm meal and marvels at how simply meeting one’s basic needs can elevate one’s spirit.

The decision to break up each episode into tiny vignettes give Girls’ Last Tour a great sense of tempo. The show is made up of simple moments and ideas structured more like poems than narratives. Each piece is a sensation or an action taking six to eight minutes to complete. Then it flows into the next poem. There are larger questions that the show might one day address, but the show has no particular urgency about answering questions about the world or giving the viewer a larger plot thread.

This episode features snow for a bit and there’s a small moment that perfectly captures the feel of this show. Yuuri builds a snowman from the snow and for the nose she uses a bullet. In the eyes of a child, a tool for destruction has become a creative plaything. The natural snow from the heavens mixed with the industrial tool of man’s crafted plans for destruction mingle into a happy snowman. 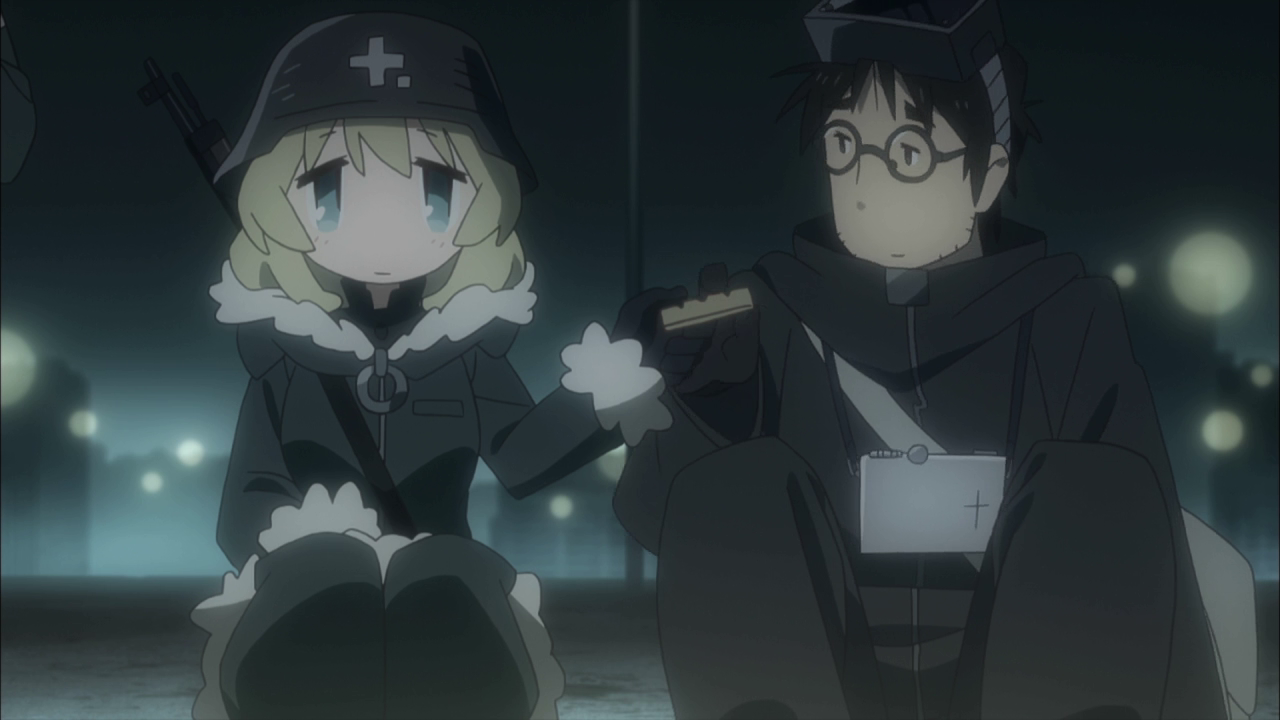 Chito and Yuuri, driven by the taste for fish meat, move deeper into the city to try to find the source of the fish. Along the way they come to a chasm they can’t pass until they stumble into Kanazawa demolishing a building to make a bridge to reach the other side. The girls are wary of him at first but then offer him a ride as he explains his desire to map out the city.

Kanazawa’s presence directly forces the two girls to think about the point of existence. Kanazawa is driven by a desire to map the city. It gives him a purpose and a life goal that drives him forward every day and gives him a sense of progress. The two girls are simply surviving and getting by. Yuuri seems untroubled by this and doesn’t particularly think she needs a reason to  go on at the moment.

This episode also gives more background to the city. The girls discover that there are layers to this city as they take an elevator up to the next level. Kanazawa also makes allusions to the technology that works being old, giving us the sense that technology has regressed in the wake of the war.

The show takes a dark, existential turn and ponders what humanity is when stripped of any purpose or goal. Why go on? We are all going to die anyway. It’s the goofy Yuuri that provides the most poignant answer in the end, giving a moment for both the characters and audience to ponder what it looks like to go on in a world as bleak and barren as the one in Girls’ Last Tour. It’s a relentlessly hopeful show in the face of hopelessness. It’s the anime version of The Road. 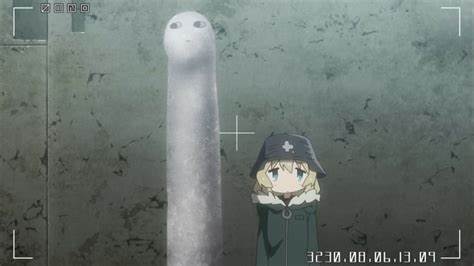 At the end of the last episode, Kanazawa gave the girls his camera. Yuuri takes photos on the camera as they drive through the ruins of the city, particularly fascinated by mysterious stone statues throughout the city. Eventually, the girls come upon a temple and Chito explains to Yuuri the idea of a god and worship.

The use of photography in this episode is an interesting bit of musing about how the photograph will outlive us all. Similar to a couple of episodes earlier where Chito uses a journal to chronicle their journey, the photograph is a way to mark their passage of time through the world. In a landscape almost devoid of people, these last vestiges of record-keeping may be the only way to pass on information.

The temple sequence serves a couple of interesting functions. First, it provides a gorgeous set and a moment of reflection for the two girls as they take in the majesty of the temple. Second, it gives them a moment to muse about god. Yuuri muses if Chito is a god but then Chito says gods require food offerings. Yuuri thinks that is taking the god idea too far as no god is worthy of giving up her precious food.

Overall, this episode is a nice balance of playful and cute moments contrasted against deeper musings about the nature of what life is like in this world. It’s a good respite from the existential feeling of the previous episode and continues to get good mileage between the core differences between Yuuri and Chito.

The girls discover an apartment building and dream up their ideal home together. They then take a nap and Chito has a crazy dream involving a giant fish Yurri eating her. They venture onward and get caught in the rain. Seeking shelter from the downpour, the two take the time to stop and listen to the sound of the raindrops against various surfaces.

This episode demonstrates so much of what makes the medium of animation so special. The first section explores how easy it is to bring the world of imagination to life as the two girls conjure up furniture and fixings for their dream homes. Likewise, the dream sequence deals with the bizarre logic of dreams in a way that works much better in animation than it would in live-action.

The rain looks fantastic. For whatever reason, anime has a preoccupation with rain and I love it. This vignette elevates the animation so much by being preoccupied with the sound of rain, adding a real sense of depth and impact to the rain here as the girls play around with the kinds of sound rain can make when hitting different materials.

After a couple of episodes musing about existence, this episode is all about emanating chill vibes and it’s a relaxing and laid-back experience. One of the strengths of this show is its disinterest in an overarching plot and an exploration of tiny life moments in this interesting world. It’s a series of memorable moments and experiences that are closer to how we experience life even if the setting is fantastical. 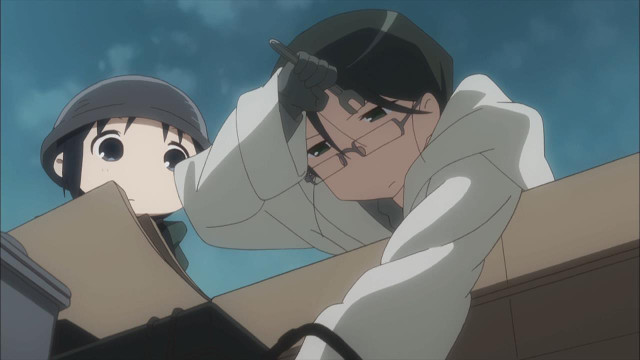 After chill vibes, this episode grinds to a halt as the Kettenkrad breaks down and Chito finds herself hopelessly trying to repair it. The girls meet another stranger, a woman named Ishii who says she has the materials to help fix the Kettenkrad she will give them if they do a favor for her. Ishii takes the girls to a hanger full of old planes and tasks them with helping her fix one so she can fly it to another nearby city.

Here we get another glimpse into the world that suggests that this is indeed a technological regression back into 1940s era technology. The plane being built is of that era and the fact Ishii has parts to fix the Kettenkrad suggest that those parts are what people tend to use to maintain what technology still works.

The more I think of the setting, the more I see it as Japan dealing with the trauma of World War II and the sense in which their country could have honestly become an apocalyptic land stuck in the ‘40s. The complete obliteration of the city and the sense that time is frozen in a place when Japan had its most traumatic experience (the atomic bombing of Hiroshima and Nagasaki) suggests a struggle to survive in a specific moment in time even as the show keeps its timeline vague.

In spite of that, Girls’ Last Tour continues to be a show about having hope in the midst of a seemingly hopeless situation. The episode starts with the two girls groaning about how it’s hopeless that they will be able to fix their Kettenkrad and yet the possibility of flight breaks into view give them a sense of hope that there might be a way to rise above their situation. Likewise, Ishii holds out hope to reach the other city even as the odds are stacked against her. The persistence of hope in the midst of hopelessness is what makes Girls’ Last Tour uplifting.