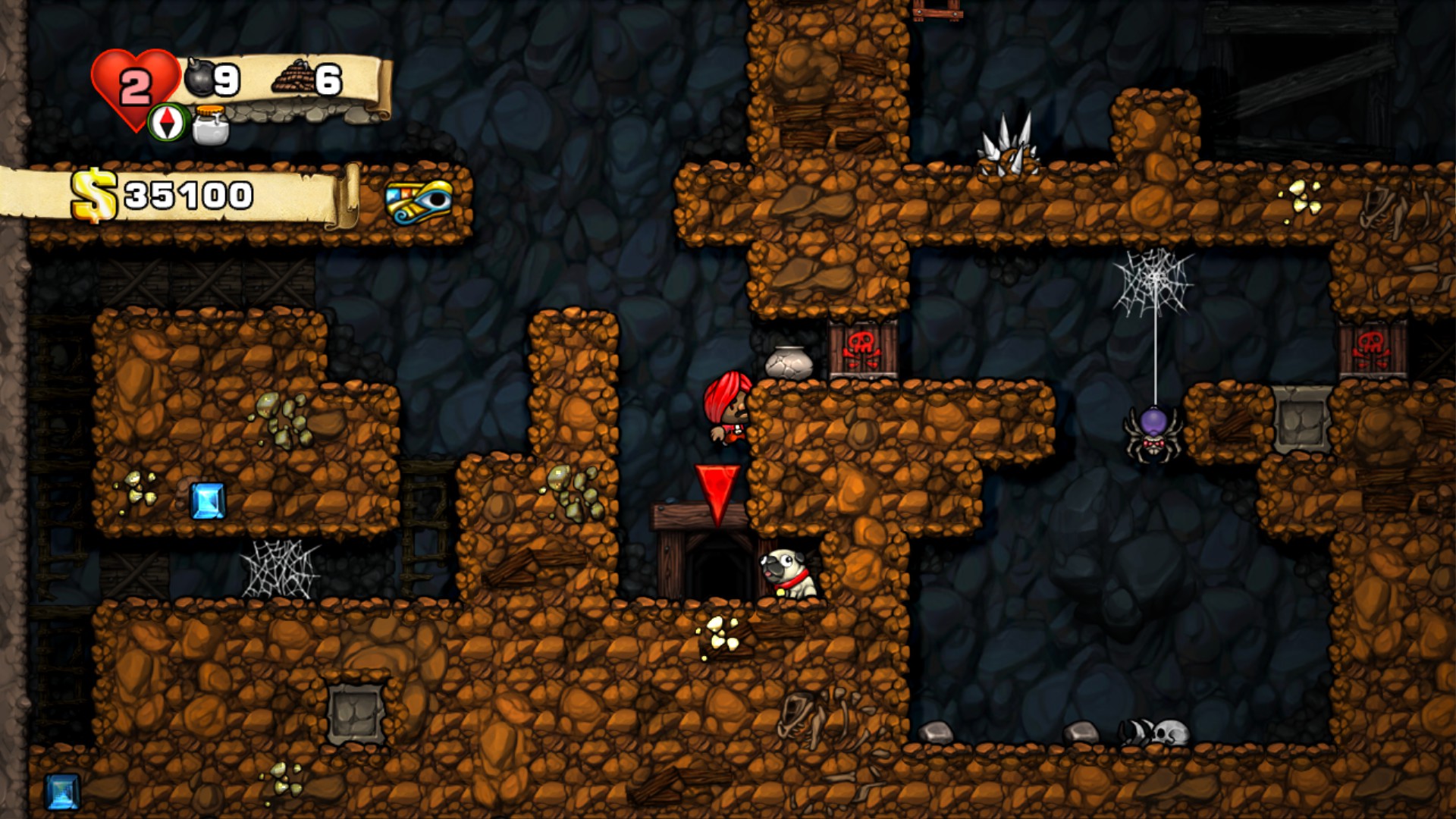 Spelunky is my favorite video game and I could write some deep, critical analysis of it but part of my love of the game is connected to how it helped me in a specific time in my life. Today is the day Spelunky 2 releases on PS4, a game I didn’t expect to exist and I hope will be delightful as the original game.

I wanted to commemorate its release by looking back at the original Spelunky and how it helped me reshape some of my thinking while dealing with depression. I won’t be as hyperbolic as to say Spelunky saved my life, but it did make one of my darkest chapters of depression a lot easier to endure.

I should explain what Spelunky is before I get into how it helped me deal with depression because the two are deeply intertwined. Spelunky is a platformer video game where levels are procedurally generated and you venture deeper and deeper down a system of caves and other biomes in search of treasure.

To break it down a little more, the platforming part means the main verbs of the game are similar to games like Super Mario Bros. where you are jumping over obstacles and dodging enemies. You have more tools at your disposal but anyone who has played early 2D platformers will likely be able to understand it on a basic level. 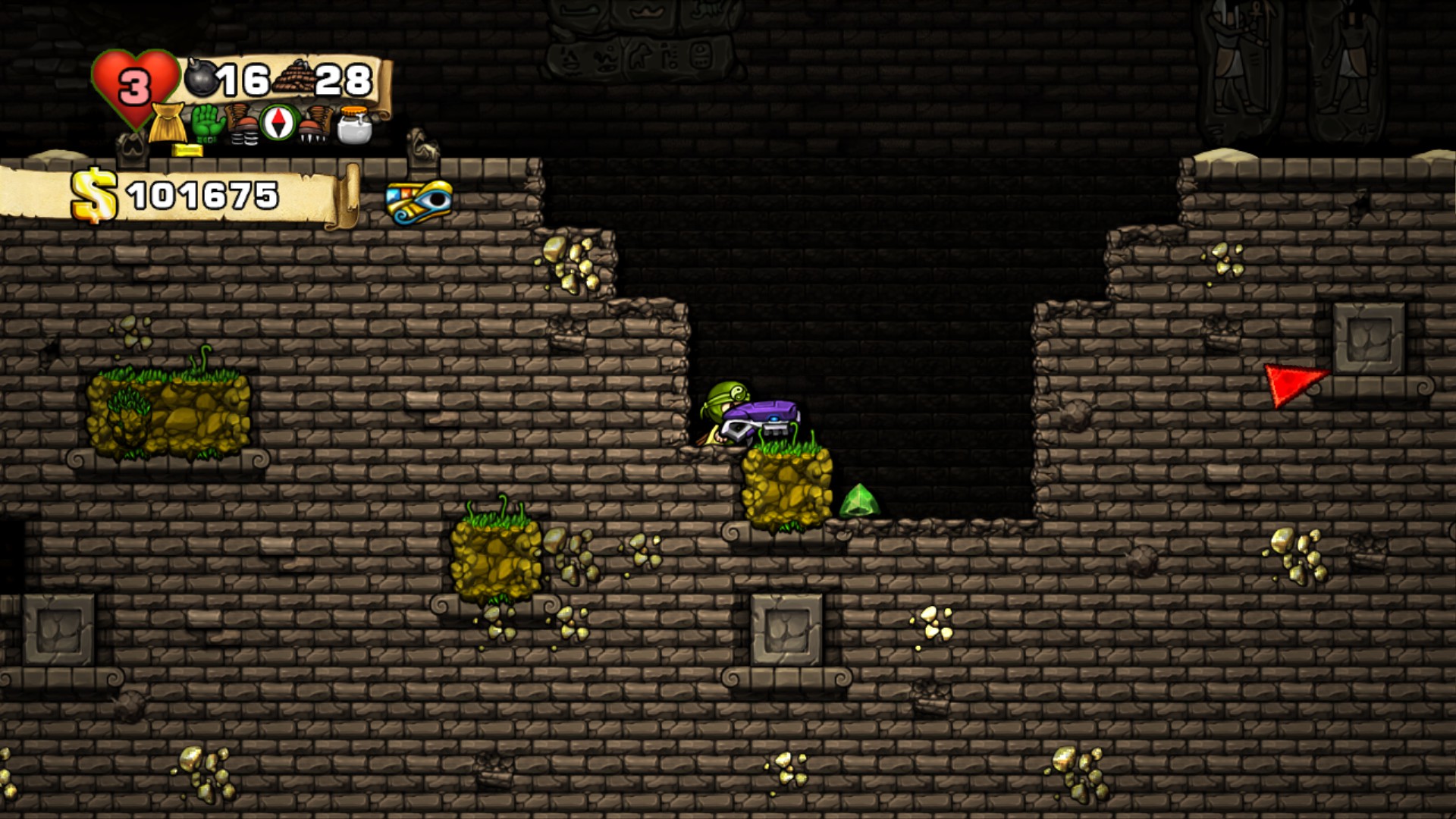 The procedural generation part means that instead of each level being hand-crafted by humans (which is how most video games are made) the game is programmed with a set of rules made by humans which the computer then randomizes to make unique sets of levels. The result is that each time you play the game the layout of the level, placement of enemies, traps, gold, and items is unique.

This means each time you play Spelunky you have no idea what is ahead of you which makes each leap one that could be to your death if you aren’t careful. Add in the sinister design of enemies and traps and the fact that when you die you have to restart the entire game with an entirely new level layout and Spelunky becomes an extremely hard game to win. It makes the chances of success extremely slim, but it also is made in such a way that when you die it’s usually because you were not cautious enough or took too many risks.

The original version of Spelunky came out in 2008 as a small free game. I played this version for a while back when it came out and while it was fun, it lacked polish and finesse. The soundtrack was fantastic. I liked it a lot but never stuck with it for too long. Eventually, the original designer Derek Yu announced a HD remake and it first came out on Xbox 360 with a PC release announced some time later.

The PC version released August 8th 2013 which was when I first started figuring out I had depression. I finished graduate school that year, defending my thesis in February 2013, and then immediately began job hunting.  Fast forward to August and I had done maybe one interview out of hundreds of applications and hadn’t even made the second round. I was tired, I was frustrated, food started tasting bland, I lost interest in almost everything, and a lot of people around me expressed concern and how out of it I seemed. 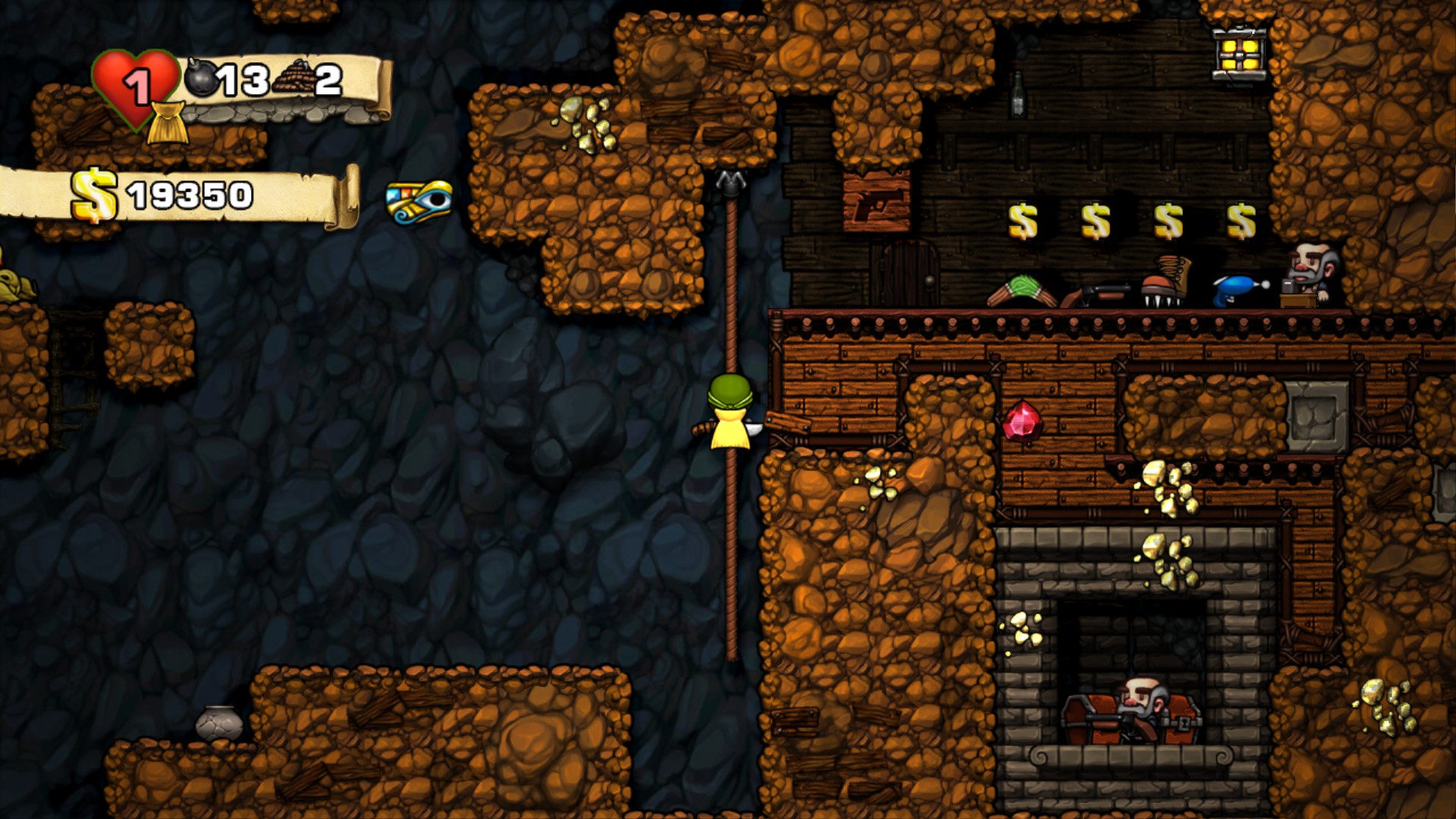 For the first in my life I had no structure to my day, no goal, no consistent pattern. A lot of days started to run together with nothing demarking any real difference besides a weekly workout with friends or the usual weekend events. Most of my daily social interactions had been with people in school and now I was at my parents’ house holed up in my room all day looking for work.

Worse than that, the isolation forced me to face all the mental and emotional baggage I had put off for all of my life because I had been able to keep myself relatively busy and task-oriented. With all this free time on my hands I had a lot of time to reflect and realize that I had put my emotional well-being on hold. All the emotional stuff I stuffed deep down manifested itself as deep, overwhelming depression.

At some point I had a conversation with my mom and she finally said the d-word. She asked me if I thought I was depressed. I said I wasn’t sure. I thought I might be but I knew intellectually that many people had it worse than me so that I shouldn’t feel depressed, as if it was something in the sphere of my control. That I could simply compare myself to those who had it worse than me and I would snap out of my depression. Of course, anyone with depression knows that’s not how depression works. 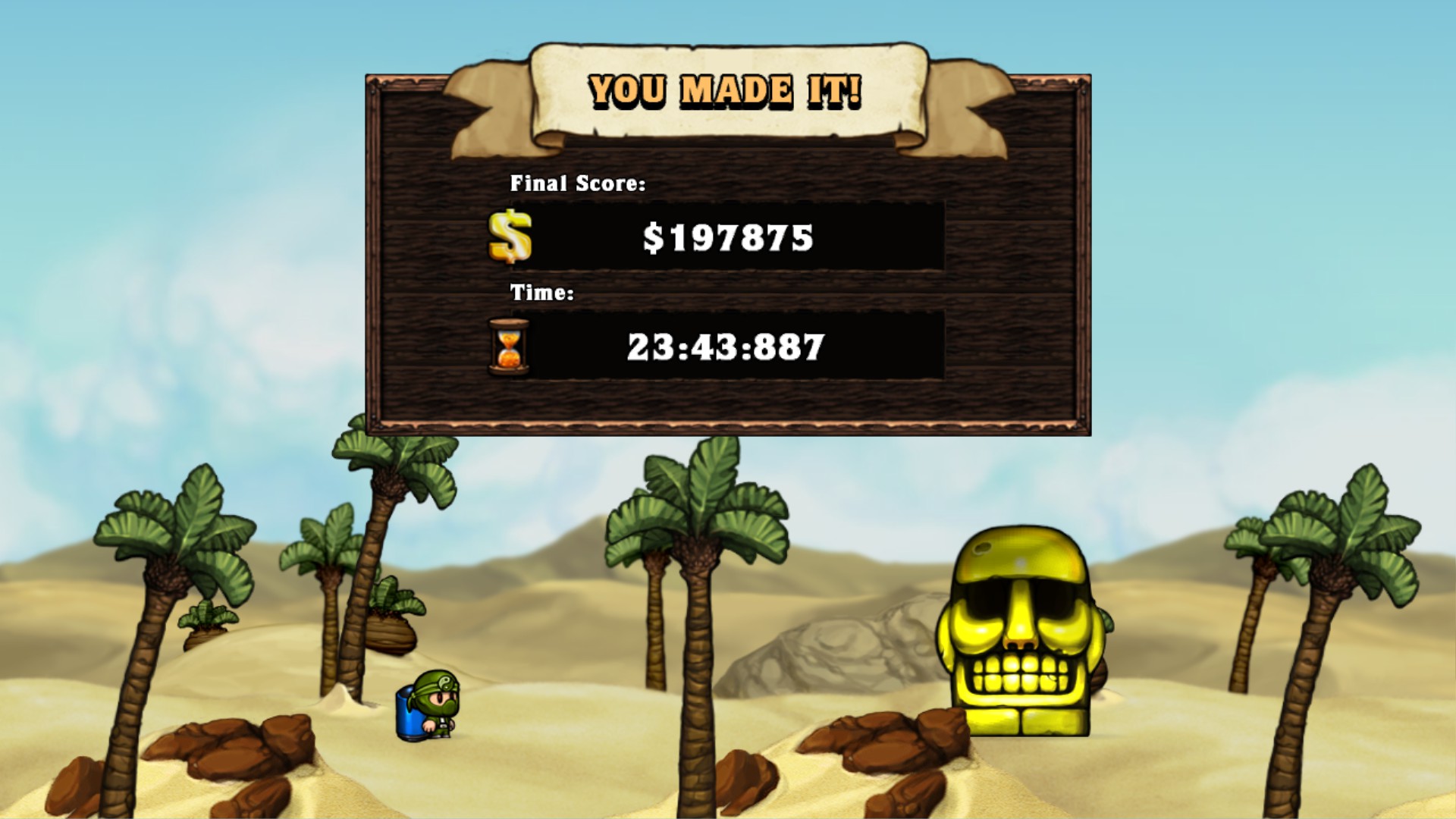 Video games don’t have the power to administer medical care or walk you through years of emotional damage. What video games can do was give some modicum of relaxation and mental control in a time in my life when I was very anxious and felt that almost everything in my life was completely out of control.

For as hard and random as Spelunky is, the way I would describe the game is one of precise control. Everything in Spelunky abides by rules. You are always in complete control of your character and the rules of how your character behaves is consistent. This means that when you miss a leap or fail to dodge an enemy it’s because you made a mistake. You pressed the wrong button, you leapt too early, you made the mistake because you are in control.

But the game is also very much about things outside your sphere of influence. It helped me recognize that which I cannot control. Level designs are random, as are enemy placements and other variables. I can’t control that layout but I can control how I react and behave in that space. I can recognize the patterns of previous experiences and correct them to try to make better choices next time. As much as Spelunky is a game that gradually teaches you about how to play itself through the experience of playing it I was able to reaffirm certain mental patterns in my brain. 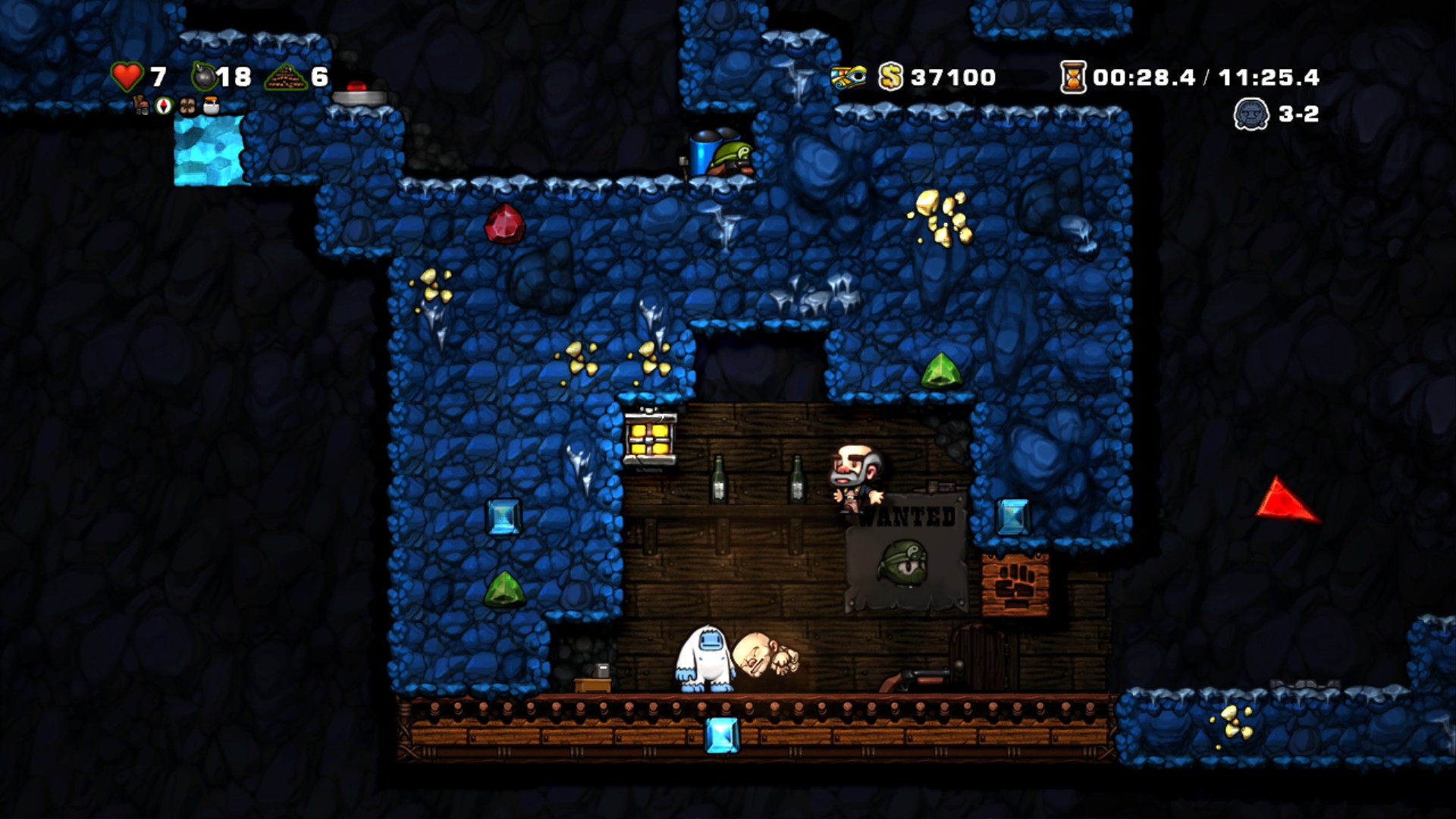 People often talk about depression taking away choices from you, that you no longer feel the capacity to do certain things even if you recognize you should do them. I certainly had times where I felt this, but playing Spelunky gave me enough sense of control and structure that I was able to mentally trick myself out of this mode of thought on most days.

With Spelunky, I found that I could break up my day into a cycle of applying to jobs, playing some Spelunky when the fatigue of job applications was too much, and then move onto something else in the late afternoon and evenings feeling that I had both accomplished something towards employment as well as developed skill within the game that made me feel like I was getting better at something.

In turn this motivated me to remain diligent in daily seeking work. I tricked myself into this by not allowing myself to launch Spelunky until I had applied to some jobs. It didn’t always work but I could be honest about having a bad day and simply recognize that sometimes bad days happen. They aren’t things to be fixed. You simply recognize it was a bad day in the same way that sometimes you have to recognize you had a bad run (an attempt to win) in Spelunky. Dust yourself off, get a good night of sleep, and try again tomorrow.

Spelunky became part of my daily routine and I began to recognize how it reinforced these ideas in my mind every day, giving me the energy and drive to do other tasks. One of the worst parts of being unemployed is the lack of structure. You’ve got all day to accomplish tasks with no sense of urgency. 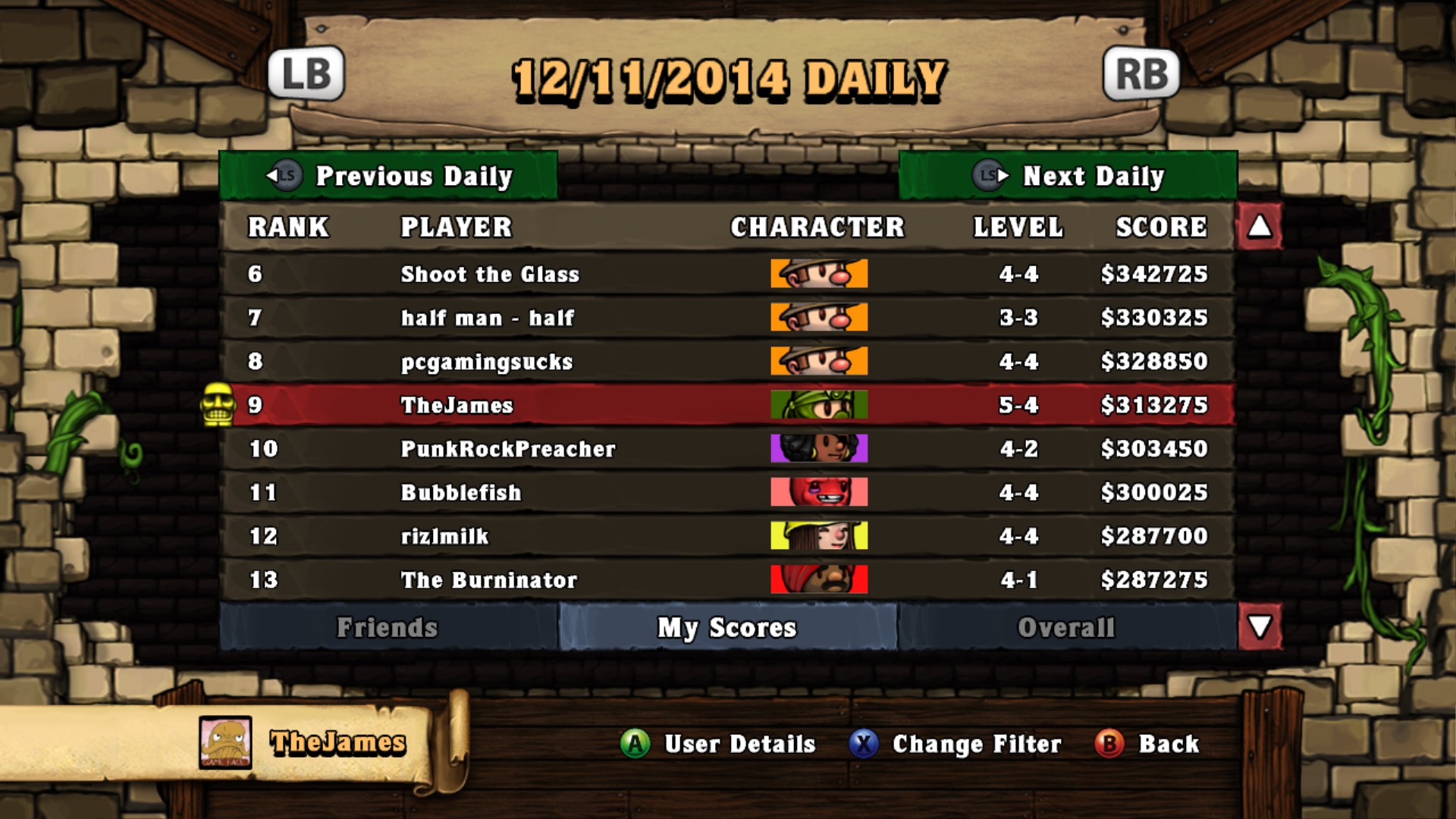 Spelunky gives players a daily challenge: a set “seed” of the game where everyone plays the same randomly generated set of levels during a 24 hour period for a place on the global leaderboards. At first my placements were abysmal, but at some point I could get to the end of the game and even got to the top in the world 100 a few times. It’s the first time I cared enough about a game with a leaderboard to get competent at it.

The daily challenge gave me a reason to check in every day with Spelunky and motivated me to get better at the game so I could get higher on the boards. When you’re depressed, one of the recurring feelings is that you’re worthless and not good at anything.

Even in the darkest moments of my depression during this time I always could have a good time with Spelunky because it was something I felt I was getting better and better at playing. And when I had a good run and placed high on the boards, it felt good.

As I got a better grip on coping with depression, the medication started to kick in and I landed my first full-time job after school. Other interests began to dazzle me again and Spelunky stopped being part of my daily routine. For a few years I might dip my toe in every month or two for a few quick runs before going back to my many other interests.

I would eventually return to Spelunky from another angle. I picked up the book Spelunky by creator Derek Yu when it was released in 2016. Yu’s approach to game design and programming fascinated me as there’s something about the purity of the design of Spelunky that kept me thinking about it for years.

Jump ahead to this year and I would finally decide to try my hand at making some video game prototypes of my own and I’ve got a couple of videos of what I have made. Like a lot of my projects lately, it hasn’t taken off but I’m glad I tried it and it might be something I return to someday as I did enjoy the process.

As much time as I spend breaking down how Spelunky provided a loose mental framework that helped contribute to me cope with depression I do want to stress two final things. Video games are not a valid cure for depression. It’s a mental illness and like all illnesses you need to seek the help of professionals to get better. Video games can make it easier to endure hard times in life but they are not permanent solutions to what could potentially be a lifelong struggle with mental illness.

Second, like most forms of entertainment, Spelunky also functioned as a form of escapism. We often frown at escapism but sometimes escapism is important because it’s a temporary release from the prison of reality (in my case, the reality of depression). It’s by no means a long-term solution to a problem that should be dealt with by professionals but I think my darkest days of depression would have been much harder without the shifting walls of Spelunky for me to explore.