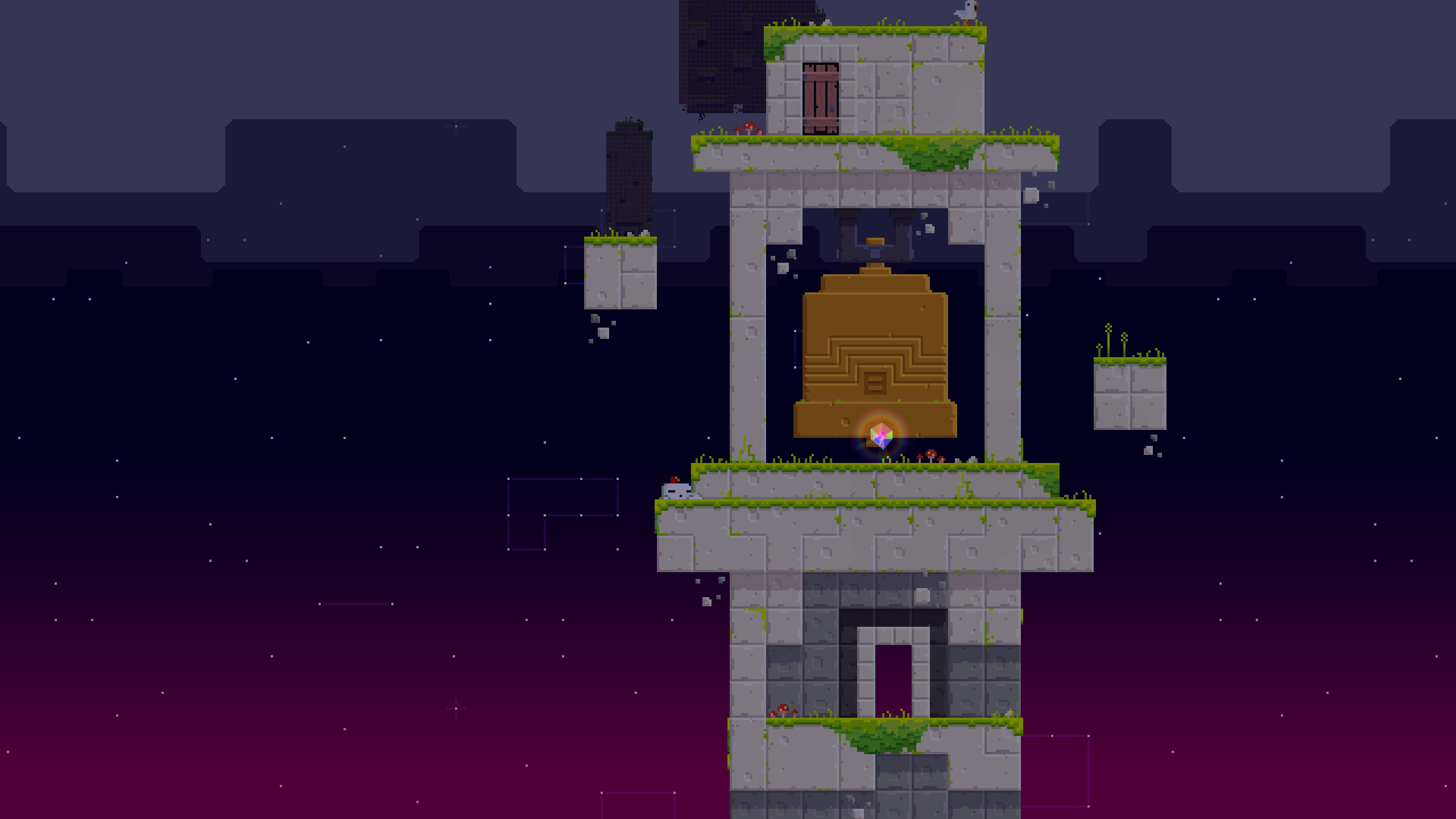 When Fez released on PC in May of 2013 I adored it. I was fresh out of grad school, looking for a job, and had time on my hands. I quickly played through the game and loved it so much that I completed every optional puzzle, finding every collectible, unlocking every secret until I had every achievement, and saw every room.

Fez evoked a feeling of exploration I hadn’t felt in a game since playing the Myst series. From the cryptological puzzles, the strange world design, and the emphasis on lack of combat, it inherited many of the design ethoses of Myst. It also was obtuse and obscure and at that point coming right out of grad school, I valued the novelty of something obtuse and obscure. It was, in many ways, a game made for me at that point in time.

With seven more years of time to think about games, design, and look at what the landscape of games is like now as well as playing more games from the past I think about a lot of details in games I didn’t before. I look at elements that passed me by in a time where I only had a fraction of exposure to games as well as a time when there were a lot fewer games competing for my attention.

For instance, one of the things I notice now about games is the second to second gameplay. Besides the games of my childhood, I hadn’t played a lot of platformers before I played Fez. Now I’ve played many more, especially with the rise of the indie platformer birthed in part out of the popularity of Fez. 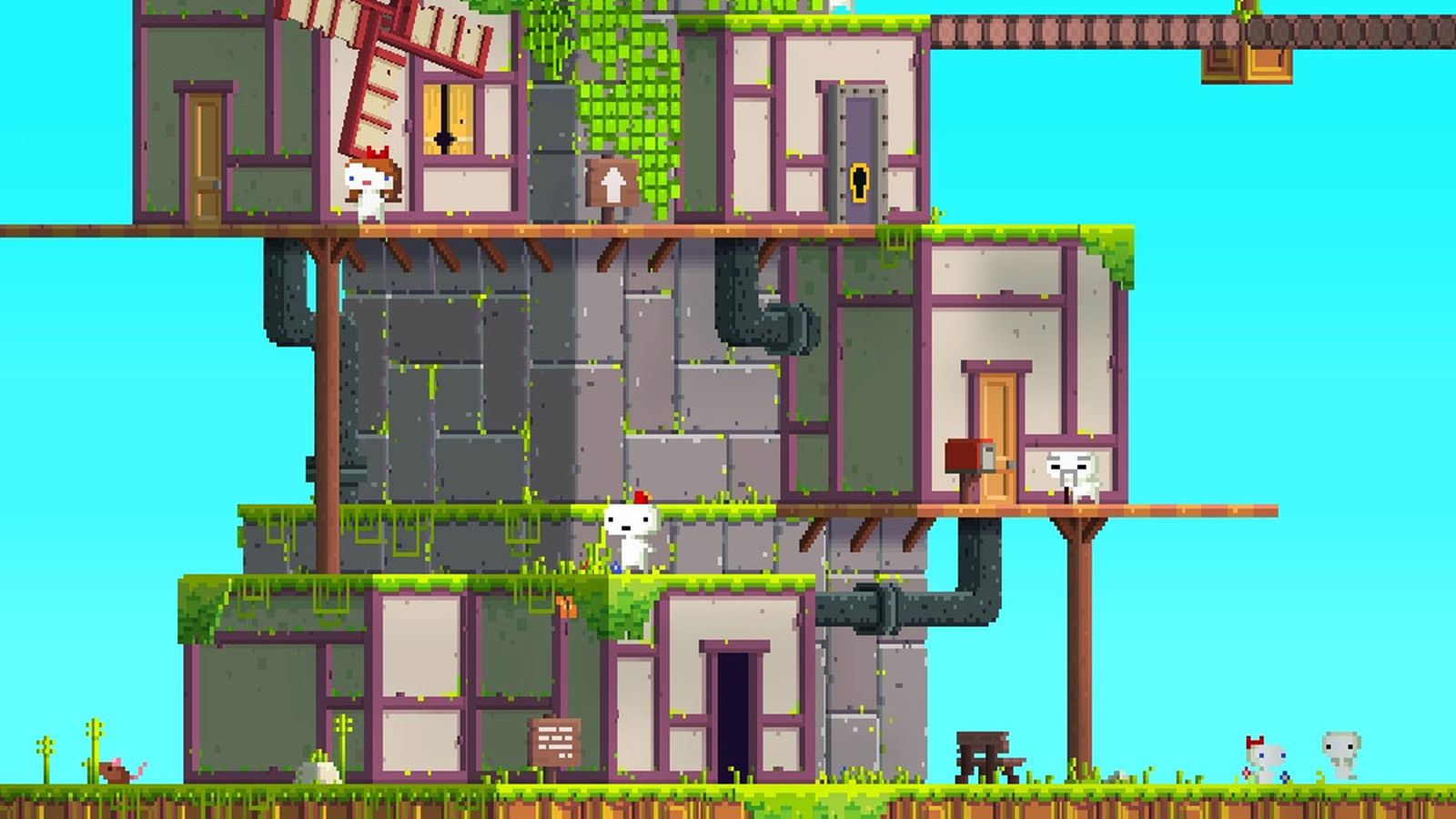 The core problem of Fez as a 2D platformer is that it’s not fun. The jumping is not fun, the fact you grip onto and slowly pull yourself up on ledges is not fun, the air control is restrictive, the sense of momentum is stale. Not every game needs to be a pixel perfect platformer or have compelling physics, but if I had to describe Fez’s movement in one word, I’d call it lethargic.

Coupled with this mechanic and the main hook of the game is the fact you can rotate the world 90 degrees, seeing every pixel as an actual 3D cube in the game but navigating in four distinct 2D planes. It’s a great technical accomplishment and a nifty effect, but Fez never finds a way to leverage it creatively with the platforming, in large part because anytime you rotate the world, you kill your horizontal momentum.

Fez is also touted as an exploration game but the exploration is often unsatisfying, confusing, and irritating. For one, the map system is absolutely abysmal at helping you navigate the world as layers often overlap each other meaning you have to rotate this weird map in a way that completely disorientates you in order to figure out which rooms branch off of another room. 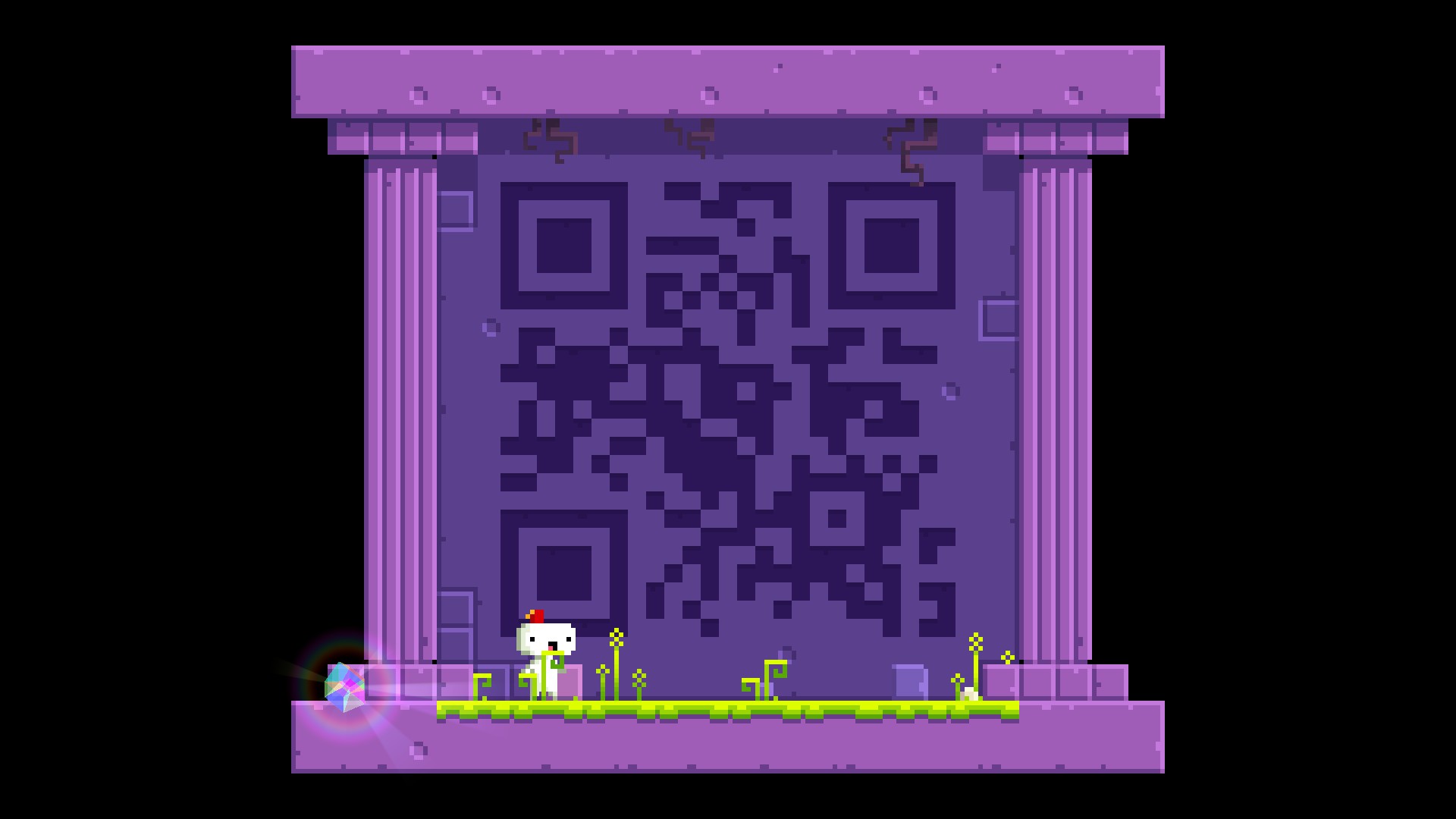 Exploration might be more satisfying if they were gated behind cool puzzles but instead the game crafts what I’m going to term non-puzzles. A puzzle asks you to solve a challenge in order to get the solution. Fez does have puzzles but it has just as many non-puzzles. Non-puzzles ask you to regurgitate information without any need to solve something.

For instance, there is a point where the game places a QR code on the wall. Pull out your phone in the real world and scan it and it simply gives you inputs for your controller. Put in the inputs and you get one of the collectible anti-cubes. Many of the anti-cubes are collected by doing clever puzzles. This is not one of them.

Another non-puzzle vibrates the controller on the left and right side and you input the pattern to once again reveal an anti-cube. It’s frustrating as the game can be played without a controller or with vibration turned off meaning some players will get stuck due to the fact the information is presented in a way not accessible to those people. It’s not a puzzle to feel vibrations. It’s a response to stimuli.

I also take umbrage with the game’s most esoteric and complex puzzle: the number and language system. I say this because I want to love this part. I say this as someone who played every single Myst game multiple times and learned the number system and wrote down charts and diagrams to solve puzzles. I want to love the cryptology here but the way it presents you getting the information here is too obtuse. 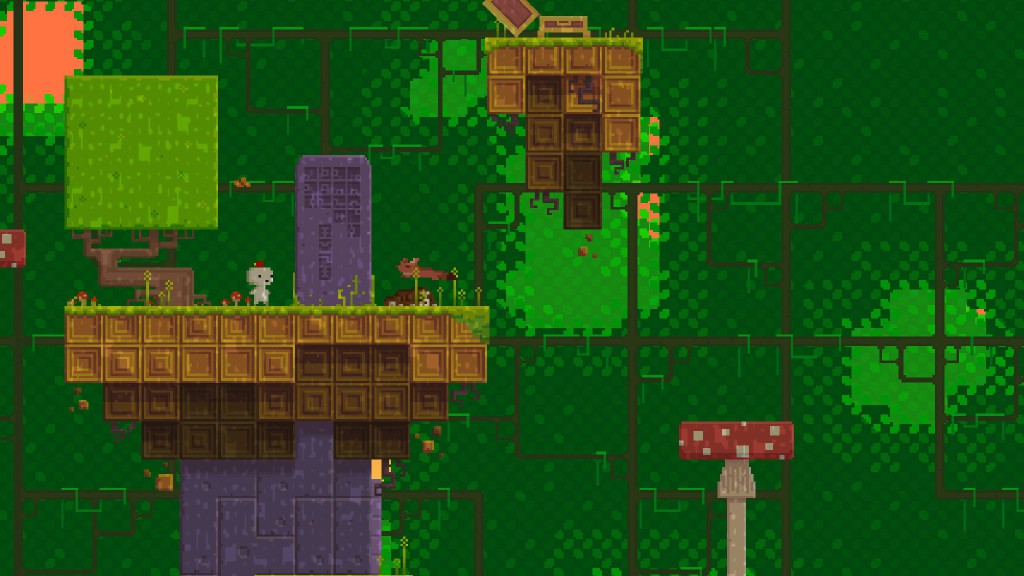 Throughout the world, you encounter the language and you’ve got no context clues as to who might be saying what. No fragments of what a word might be in this language. What you get is one singular room where one singular visual trick is supposed to tip you off that you are looking at the key to cracking the language.

It’s a visual gag. A quite clever one I have to say, but one that is so easy to miss that I simply cannot in the year 2020 fathom why you’d lock 90 percent of the dialogue in this game behind understanding one simple visual in one room.

In elementary school, many English speakers learned the pangram “The quick brown fox jumps over the lazy dog.” Used to teach typing and penmanship, it contains all the letters of the English language. It also is used by cryptographers to encode/decode language.

Fez uses the pangram literally, placing a brown fox jumping over a lazy dog in one room with a pillar that spells out the sentence in the other language. It’s clever, but on the side of being too clever, and far too obtuse when you consider it’s one easy to miss room out of over a hundred that you explore in the game. 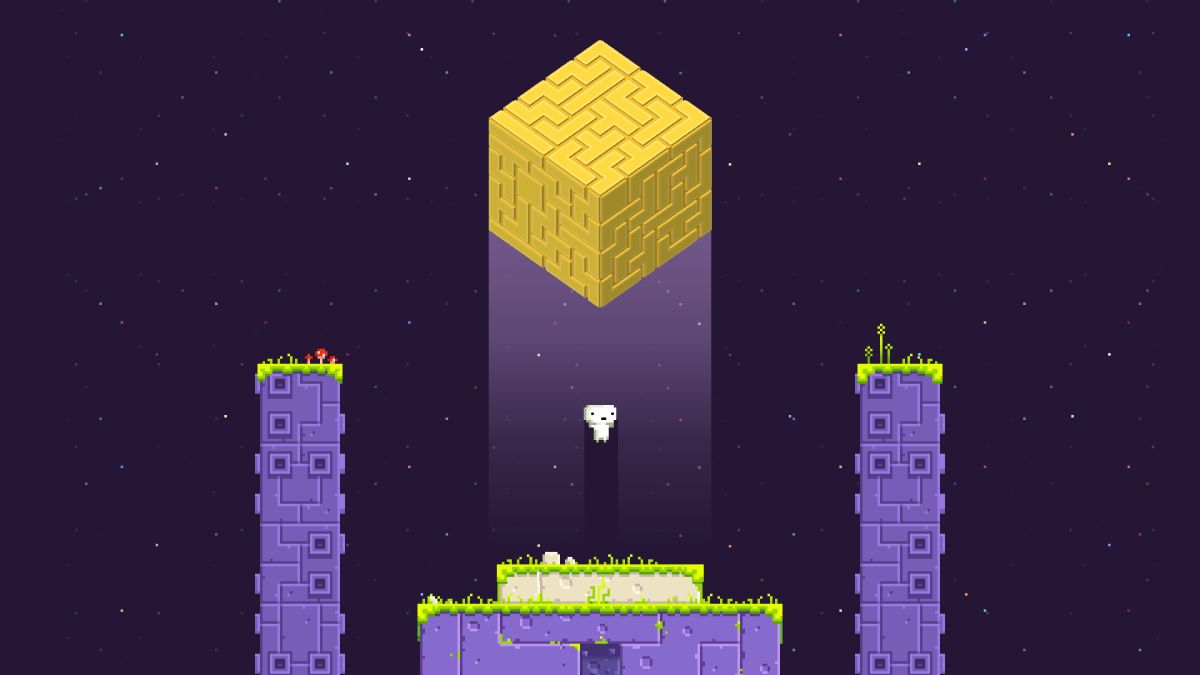 I think a simple fix that could have solved a lot of my problems is if the cubes you were collecting were somehow keys to the letters and numbers of the world and maybe after getting certain sets you could solve the cryptographic puzzles. The clever players could ever extrapolate out the puzzles.

And I haven’t even talked about the most esoteric and bizarre puzzle element that also relies on your finding and understanding one room in the game in order to understand how a certain sequence of coding works in order to gain the rest of the anti-cubes. The worst part is that you don’t truly unlock the means to solve these puzzles until you finish the game once, meaning people trying to understand these puzzles will simply be wasting their time on the first playthrough.

You could argue that in the age of the Internet we’re expected to look up this information, but I can’t help but return to Myst which were games where you were basically left to your own devices to solve. I’d have several pages of notes scrawled trying to make sense of the island of Riven and how the whole thing worked. I’d have notes written like some madman trying to unravel a conspiracy as I tried to understand what significance each piece of the world might have. Myst and its games always had enough of a lived-in sense of place that you could extrapolate information based on context. Here, the context is an easily missable visual gag that you need to unlock a ton of information.

In the Myst games, you never needed to understand the D’ni language to understand the intents of what people were feeling or suggesting with their words because you had tone, inflection, and body language conveying even more than the words. The games used FMVs, real actors giving real performances. In Fez, you just get chirpy beeps to a scroll of symbols. No context, just cold, indifferent, raw information. 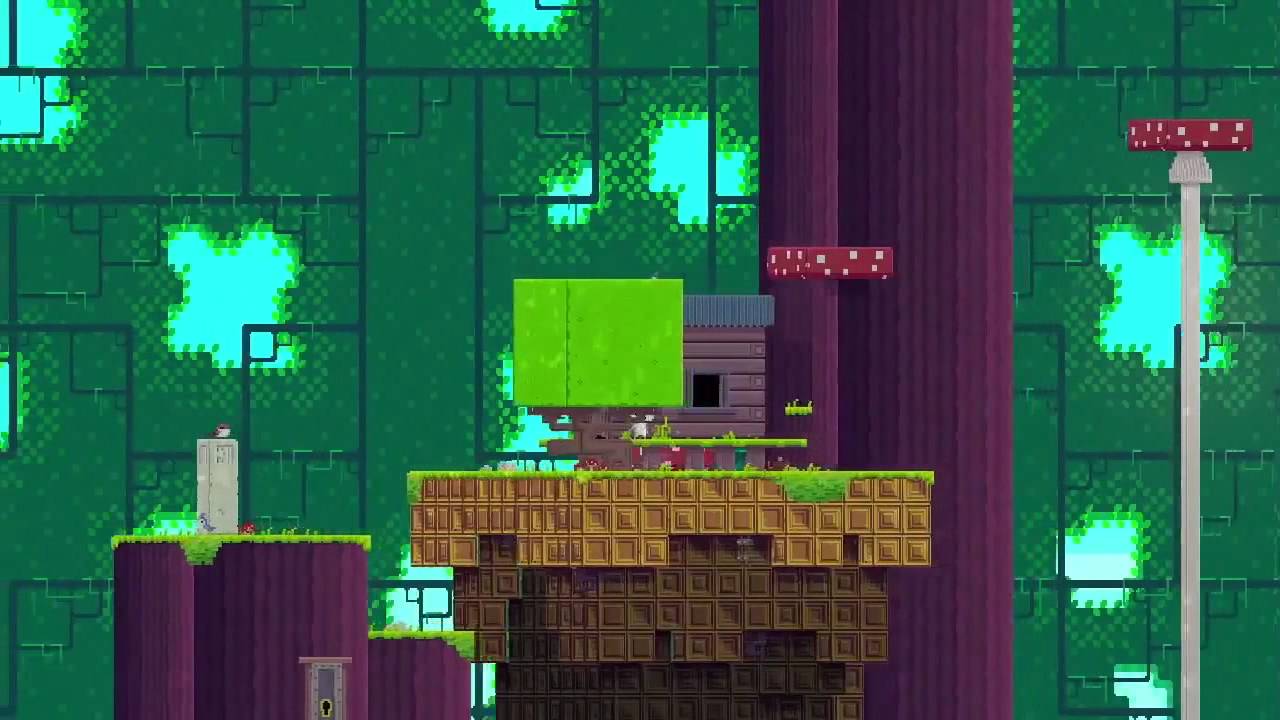 And that’s where the ethos of Fez falls apart for me. It’s a game that can never get past its digital, 16-bit nostalgia and aesthetic. Whereas Myst tries to use machines to render photorealistic worlds as best as computers can to transport you to another place both familiar and surreal, Fez tries to capture the feelings of digital worlds.

The worlds of Fez are gorgeous, lovingly captured places, but they are literally made up of bits, you capturing 8 cube bits to make a full cube. It’s a game about the most fundamental bits of a computer and as much as it wants to romanticize an era of gaming, I can’t help but feel cold and distanced from it all by the end. It’s a game romanticizing the aesthetics of games, a representation of a representation.

I know for some that’s part of the appeal, the idea that Fez captures this nostalgia for a type of game that a generation grew up playing, but the world it is trying to explore and the mechanics of the game feel antithetical to that goal. I can’t help but think of games like VVVVVV and Celeste which I think do a much better job of capturing NES era gaming than Fez as they work on both an aesthetic and mechanical level whereas Fez seems incomplete in both realms.

Fez also loses its sheen in a post-Outer Wilds world which does a much better job of capturing ideas of exploration, discovery, wonder, and language in a game where the puzzles are far more clever and compelling to solve. I understand that they are mechanically two different types of games but the design ethos behind both are similar.

And as much as I look back on that fondness of translating numbers and languages from Myst, Cyan’s return to the genre with Obduction demonstrated that you could drop the esoteric puzzle solutions and craft the same sense of awe, atmosphere, and wonder. 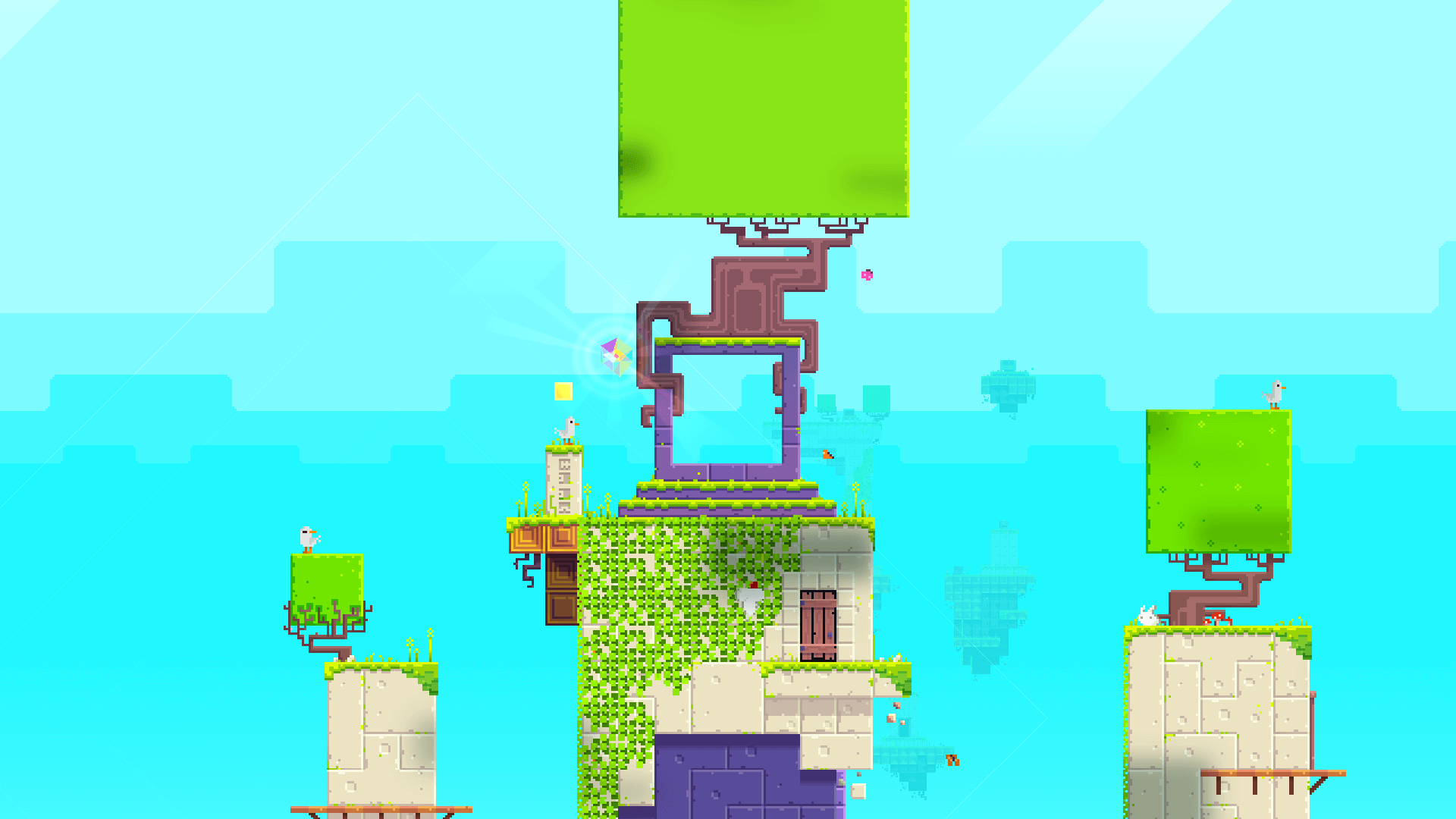 I know I spent a lot of time contrasting Fez to other games, but even on its own terms, I think the game doesn’t work. It’s fundamentally an exploration game that isn’t fun or satisfying to explore. It’s a platformer where the jumping doesn’t feel good. It’s a puzzle game where the puzzles are one-offs, braindead, non-puzzles, or too esoteric.

I hate to write so much about my dislike and frustration for a game I once love, but there’s also something cathartic about exorcizing these words and thoughts as they percolated in my mind while revisiting Fez. To fall in love with anything is also to run the risk of falling out of love with it one day.

People grow, change, and evolve. In the seven years since I first played Fez I’m a different person than I used to be. I’m not sure those things I left behind and those that I gained have anything to do with why I don’t enjoy Fez anymore. All I know is that it’s no longer a favorite.

Part of revising Fez might make me sad to have lost a love, but I’ve gained so many loves in the intervening years that fill the space it occupied before. For a moment in time, it was a favorite. I don’t hate or resent the time I spent with Fez. In those moments, I think it had value. Now, it’s something I can’t adore anymore.