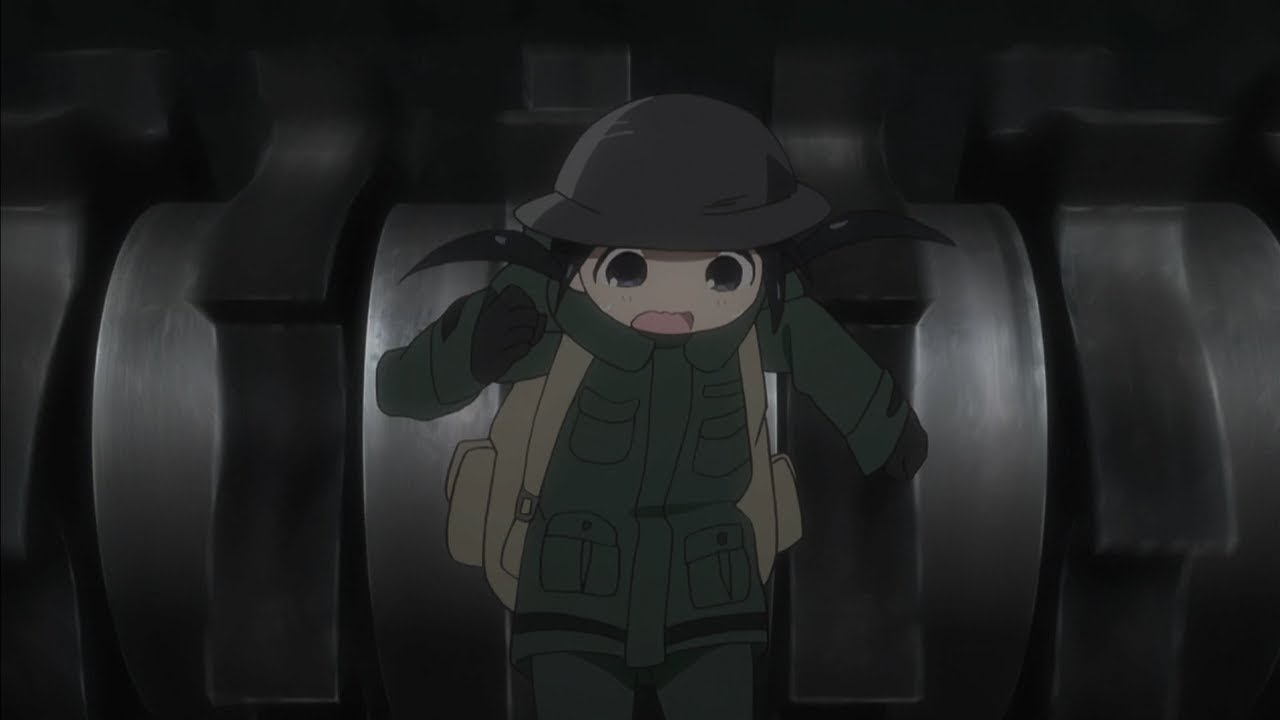 After hearing the promise of a place with lots of food, Chito and Yurri do what any reasonable person would do: boogie for that food. Unfortunately, that means climbing atop a series of pipes in one of the underground facilities. Chito’s fear of heights makes progress slow and twice as dangerous. Eventually, they reach the facility and discover the joys of baking.

One of the most uneventful episodes of the series, It’d be easy to skip over this episode and move ahead. But there are a few notable things about this episode. The first is its depiction of imagination as the girls extrapolate a solution to Chito’s fear of heights. It’s the kind of tiny visual gag you can pull off in animation that wouldn’t translate to live action.

Second, there’s something compelling about driving the story forward over the most mundane aspects of survival. The girls have to eat so the conflict is to get where the food is. They have to overcome Chito’s fear of heights. Most modern stories rely on complex and sometimes unnecessarily complicated character motivations when sometimes the simplest motivations are the best: a girl’s gotta eat.

Also, Girls’ Last Tour remains such a sensory experience as it takes in the sights, smells, sounds, and taste of food as the girls bake their own rations. The only way to make it even more sensory would be to ship rations to viewers of the show and have them eat along to taste the food. Anime is known for its deep fascination with food and honestly the fact that Girls’ Last Tour can make army rations look appetizing is a great example of how anime does such a good job of tickling the senses of its audience. 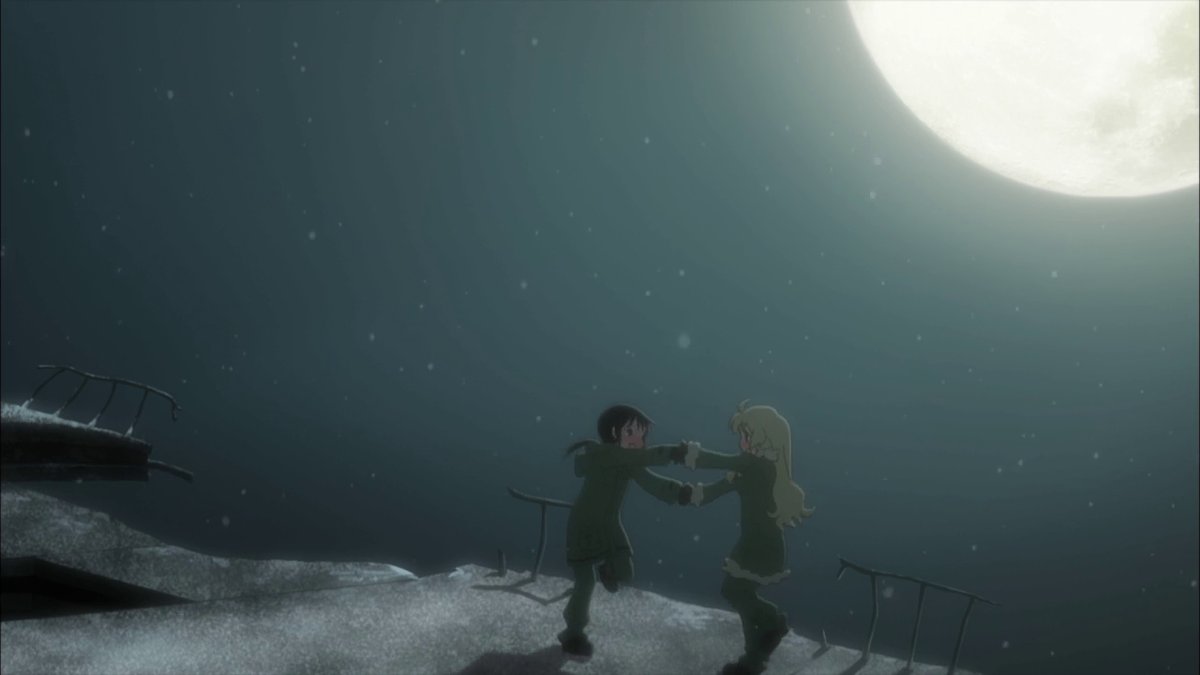 The girls’ titular tour of the nameless city is filled with empty, haunted landscapes free of any remnants of human remains. However, they do come across tall black slabs with tiny draws which Chito eventually figures out are graves. It provides yet another musing on death which is quickly followed up with them having a close encounter with death themselves only to reach the top of a tower, discover some beer laying around, and then proceed to get hammered.

Sure, you could condemn the wreckless depiction of underaged girls drinking alcholic beverages, but if you’re one of those people I think you’ve missed that the point of this show is very much finding glimpses of pleasure and joy in a seemingly joyless world. The warmth of alcohol helps staves off the looming oppression of every sight and sound around the girls.

The show still exists as an interesting paradox between the cute and clinical. Chito and Yuuri are rendered as heavily stylized depictions of girls while the world around them is more realistic and grounded. This is important because the core of the show seems to be exploring the looming sense of death amidst the joy of life.

Trying to grapple with the idea of death as this almost unimaginable thing is emphasized here. It’s something adults walk around every day mostly ignoring or assuming will never happen to them which the reality is such a shocking and bizarre truth and Girls’ Last Tour tapps into this by trying to understand it through the eyes of children. 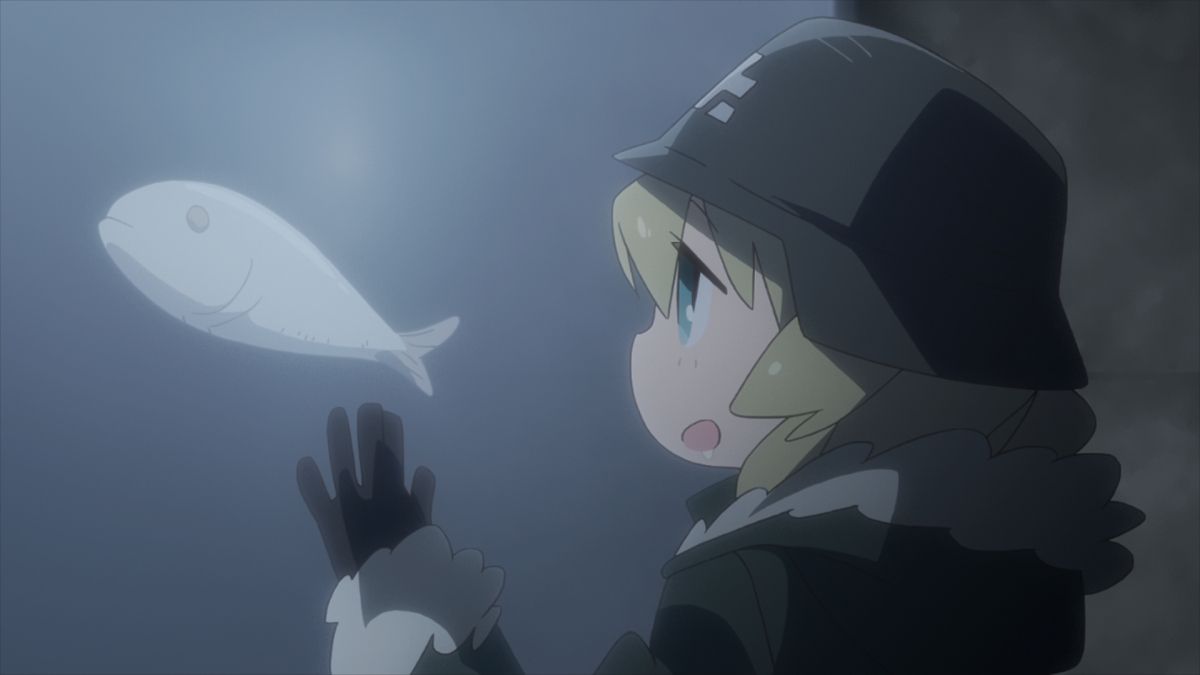 Finally, we get our first glimpse of advanced technology. The girls discover a blocky robot that is responsible for construction. It is completely oblivious to their presence and it’s not until they later encounter a caretaker robot that takes care of an aquarium that they are able to have a conversation with one. The robot is charged with taking care of the fish in the aquarium but it turns out there’s only a singular fish left.

The robots here have a great style to them even if they are not the most realistic depictions of the machines. The straight lines and legs make them fit into the brutalistic aesthetic of the world as this mostly functional, utilitarian city of concrete buildings and sharp, stark straight lines.

There’s a lonely beauty to this episode as it revolves around one singular fish and how the task of this robot is to keep the one fish alive and the girls suddenly realize the value of preserving life instead of just using it as the next meal, and by the girls I mostly mean Yuuri whose completely relatable impulse is to eat anything she hasn’t eaten before.

This episode is a beautiful blend of that childish naivety against a harsh world that is basically in its death throes. One fish means that the continuation of this fish community is basically all but over. The attempt to preserve it being more of a symbolic gesture than one of continuing the cycle of life. Still, in a world where life slowly fading away, every last breath is an act of rebellion. 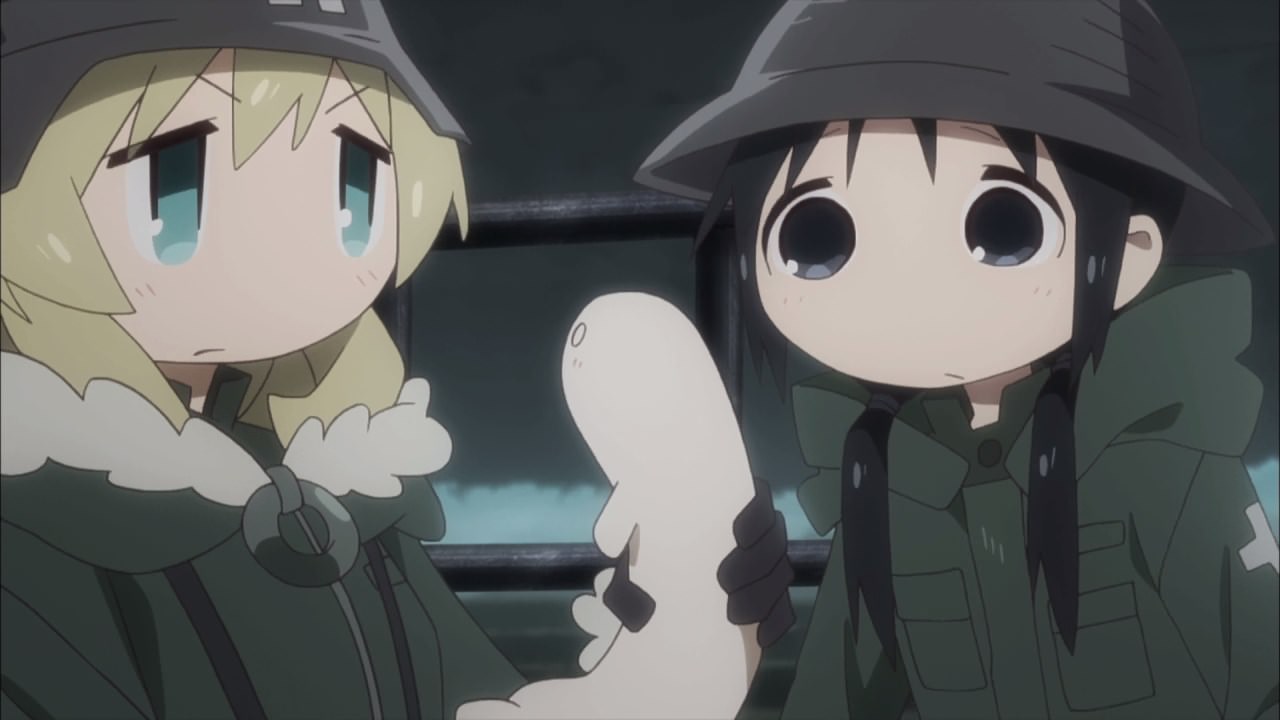 The girls ride a train full of robot remnants and discover that they can get a radio signal for the first time hearing a strange thing called “music.” Hum. They also encounter a small creature, sorta a weird white ferret like creature that they find out can communicate with them via radio.

There’s not much to this episode. The new creature is a cute companion for the girls with some interesting implications that maybe there are also some sort of biological discrepancies from our world. Maybe the result of irradiation or just some evolved new being, these creatures are interesting in their ability to communicate but their nature is still mysterious. 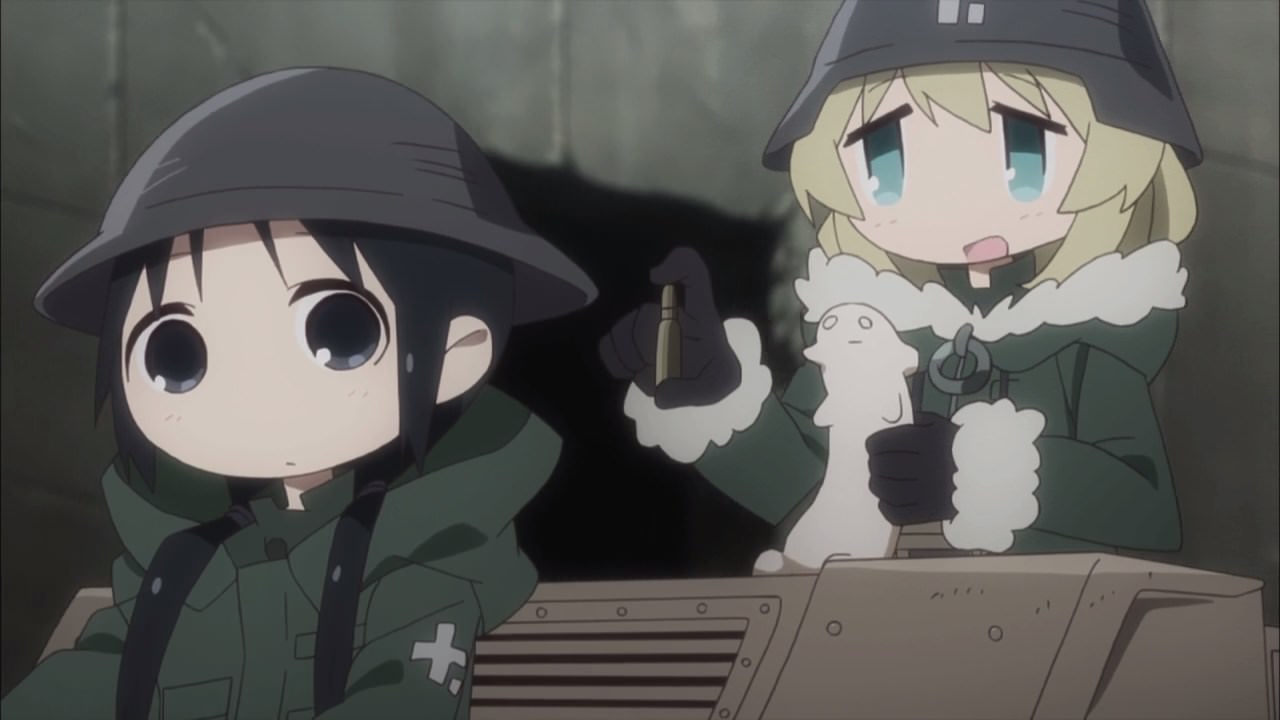 Yuuri decides to share her passion for eating with the white creature she named Nuko by feeding it bullets which is a terrible idea. It’s amazing Yuuri hasn’t done this herself. The radio starts up again and the girls decide to follow the signal, discovering the remnant of a robot along the way and finding a way to activate it.

This episode is terrifying for several reasons. First, Nuko eating bullets, while funny, has disturbing implications for these creatures can absorb whatever matter they ingest. It’s super unclear how Nuko eats it and seems perfectly fine. Also Yurri thinking it’s cool to just feed it to Nuko shows how absurdly irresponsible she is.

The show takes Yurri’s recklessness to the nth degree when Yuuri jumps inside the robot and tries out its weapons. She ends up wiping out city blocks and seems to not think much of the massive destruction she’s caused.

While the show before has supposed there’s a childishness to violence, it’s blatant here that Yuuri’s irreverent use of military grade weapons is done out of selfish whims to feel in control and get a thrill. It’s more like she’s playing with a toy than anything else, perhaps the ultimate anti-war statement here that warmaking is simply the machinations of children too stupid to realize what they are doing. 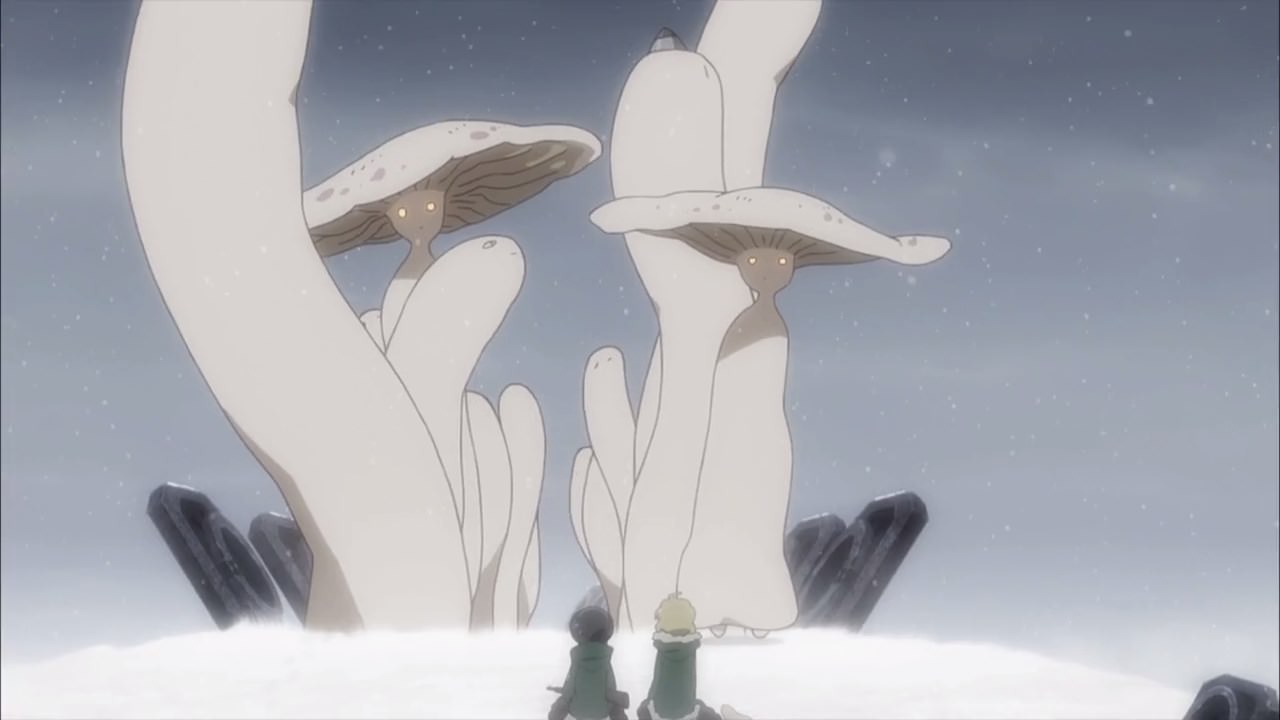 At the end of the last episode, the girls discover a sub with a full arsenal of nuclear missiles. More importantly to the girls it contains the first time they’ve seen photographic and video documentation of the world before the ruined city. Finally seeing the past and getting to glimpse what everyday life was like before the war is perhaps the best emotional conclusion you could have for this arc of episodes.

Meanwhile, we discover more about the nature of Nuko and the fact that Nuko as a being functions as something that consumes technological bits of war, a being of nature that seeks to somehow balance out the instabilities of a humanity that uses its advancement in science to threaten all of life. It’s a bizarre and hopeful way to explore how nature might correct a path of a barren planet after a nuclear apocalypse.

There’s some more stuff this episode but at this point it’s best just experienced. There’s a good chance that the show will stay done here but there is a manga that brings this story to what I hear is a more natural conclusion.

I do plan on getting the manga because I love this concept and the core duo is great and I am confident in saying after seeing these 12 episodes that I highly recommend this anime and think most people will be able to enjoy it even if they aren’t into post-apocalyptic or sci-fi stories. It’s such an upbeat story, told more like a slice-of-life anime than anything else, making fundamentally human experiences in extraordinary situations enjoyable, humorous, and memorable.