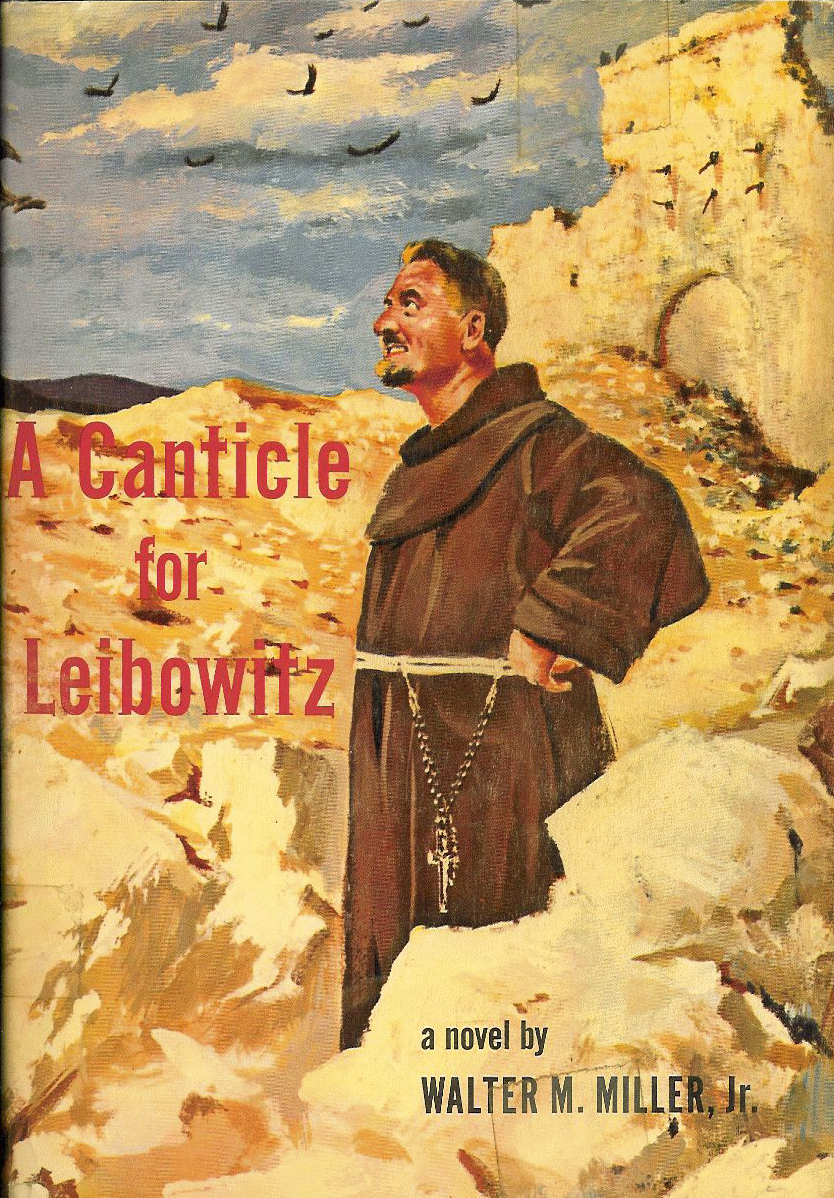 I know what you’re thinking right now: “What’s a canticle and why is there one for Leibowitz?” A canticle is just a fancy word for a Christian song taken from biblical texts that are not found in the Psalms (which is one of the books of the Bible that is entirely comprised of songs). Canticles are popular in many Christian traditions, especially the Catholic Church.

Those of you who have read your Bible will then be asking when the Bible mentions Leibowitz. I’ll spare you the search: it never does. Leibowitz is a completely fictional character for this complete fictional story that takes in a completely hypothetical future that deals with the real tensions between science and faith.

If we want to continue going down this trail of potentially unnecessary clarifications (which I do because I’m writing a review of a sci-fi novel), A Canticle for Leibowitz by Walter M. Miller Jr. is technically three previously published short stories that he eventually rewrote and published years later.

In science fiction, short stories will often come together in a Voltron-like structure, forming what is known in the literary world as a novel length book. There are some sci-fi books we’ll get to that are straight up short story collections but lots of science fiction novels are short stories combined after the fact and how we treat them will probably be taken on a case by case basis.

A Canticle for Leibowitz is a great starting point because it’s a good middle point between a straight novel and a short story collection: three short stories set at the same place but at different points in time involving the influence of the titular Leibowitz over the span of about 1000 years. There are strong thematic ties between each story as they all look at the intersection of faith and science. Therefore, it’s easy to make lots of connections, recurring ideas, threads, and even character archetypes between the three stories.

And while the above is all important to understanding A Canticle for Leibowitz in context, it doesn’t tell you what the book is about. A Canticle for Leibowitz is the story of an order of Catholic monks who survive a global nuclear war that plunged society into a new dark age where people burned lots of books because they believe our pursuit of knowledge can only lead to another nuclear holocaust.

So then Leibowitz is one of these monks? No. He’s not even alive during the story. Leibowitz was an electrical engineer who became a monk and dedicated his life to creating a new monastic order to preserve the knowledge the mobs sought to destroy. By the time the story starts Leibowitz is long dead.

Or rather by any normal estimation, he should be long dead. One Brother Francis during his time of fasting and reflection in the wilderness outside the Texarkana monastery Leibowitz founded encounters an old man who inscribed Hebrew letters on a rock, a rock that leads him to holy relics of Leibowitz. This quickly sparks rumors that the old man is Leibowitz but there’s no real way to confirm this as the old man never reappears. Years later New Rome sends people to investigate the situation and see if Leibowitz is fit for sainthood.

That’s the basic premise of the first story and a lot goes on beyond that but that premise is enough of a springboard to talk about the book’s examination of science, faith, the truth, and spirituality.

A Canticle for Leibowitz uses its premise as a springboard into philosophical, ethical, and theological questions that plague its characters as they try to navigate a world where scientific knowledge led to the downfall of civilization but religious orders are the only things that preserved scientific knowledge in the hope that future generations will find good use for them.

Refusing to split the stories and ideologies along a simple science/faith divide is one of the book’s greatest strengths as it demonstrates that religion is not inherently anti-science. When viewed correctly, the members of the faith are able to understand science properly as part of God’s creation of the universe, not something that ruins or belittles their faith.

However, as the last story shows, the fact that religious people believe in more than just what is scientifically verifiable creates for ethical disagreements between people of faith and people of science. Both are trying to do what they believe to be right and good, but the fact both fundamentally disagree about what humans are and whether or not there is a spiritual reality show where science and faith are no longer compatible.

To Walter M. Miller Jr.’s credit, these stories are told with care and a treatment of characters in which the stories never come across as moral fables or summations of which view is the correct view. He is not using fiction as a scientific or theological argument, but as a means to explore how human beings with differing belief systems navigate these conflicts among one another and try to understand themselves through those conflicts.

Therefore, each story is able to go between being dramatic, funny, tragic, pious, and profane in a short span of pages. Most importantly, each character is rendered as deeply human and equally worthy of considering when it comes to what they believe. Miller doesn’t particularly conclude which characters are correct, he only shows how each character strives to have their own morally consistent center. Everyone thinks they are doing the right thing, even the barbarians roving the land.

It’s worth mentioning the cultural impact of A Canticle for Leibowitz before offering some concluding thoughts. The book won the prestigious Hugo Award for best sci-fi novel in 1961 and is notable for being the only novel Walter M. Miller Jr. published during his lifetime. A sequel was published posthumously in the ‘90s. Today A Canticle for Leibowitz is considered a classic of the genre and there is a wealth of writing on it from both fans and academics as its world and themes provide a rich field from which to harvest.

However, A Canticle for Leibowitz is most notable for inspiring a far more popular science fiction artifact: Fallout. The popular video game series then developed by Interplay Interactive (who would later form Black Isle Studios) drew on the book as both an inspiration for the backstory of its post-apocalyptic world as well as a model for it’s techno-religious monastic order The Brotherhood of Steel. At this point, the original Fallout has spawned a number of direct sequels and a handful of spinoff games, all of which have sold over an estimated 38 million copies.

Fallout’s monastic order differs in that it is a purely secular institution. While there is a religiosity in their devotion to tech. There’s no real sense of the divine or spiritual in The Brotherhood of Steel, more taking an idea and producing it into something interesting, albeit one less philosophically compelling or dynamic than the Order of Leibowitz.

I mention this because for a generation of sci-fi fans, Fallout got us into post-apocalyptic literature and many specifically read A Canticle for Leibowitz because it is prominently cited as a major inspiration for Fallout. I think it’s important to consider that even though science fiction has a large impact on the culture, a lot of that impact is through other mediums outside of books such as video games, television shows, and films that pull inspiration from science fiction novels that the average person has not read or even heard of before.

More people have probably heard of Fallout than of A Canticle for Leibowitz and what I want to say is that if you enjoy Fallout, it’s worth reading this book to see how this novel was grafted into the roots of what makes Fallout a compelling video game series. A Canticle for Leibowitz is a more grounded story with less obvious heroes and villains and a lot less violence, but I think many Fallout fans will delight in seeing how this world is not so different than the digital world they enjoy.

While Fallout is a formative piece of fiction that formed my tastes in science fiction, A Canticle for Leibowitz has a more immediate personal connection for me. The book’s intersection of science and faith in a way that mirrors my own upbringing. My mother and father both teach in scientific fields (biology and electronics respectively) and are also dedicated people of faith (my father ministered part-time for a number of years).

One thing I was taught early on is that science and faith are not incompatible ideas but that there is beauty and design in the world that makes perfect sense in unison with the idea of a God who created everything. There’s an order and reason and purpose to things that can be known and understood. That’s a key belief of the monks in the second section of A Canticle for Leibowitz and one that reminds me a lot of my upbringing.

In a post-enlightenment world, it’s likely that science and faith will continue to be pitted against each other. There are many reasons for this that go beyond the scope of what this review is about. What is of importance is that A Canticle for Leibowitz explores that tension and the result is arguably not only one of the best novels of science-fiction but also one of the most thoughtful things you could read about the intersection of science and faith. It’s a story that works for me on a personal, artistic, and intellectual level and one I can wholeheartedly recommend to anyone who is looking for stories about faith and science or even those who just want a good page-turner set in a post-apocalyptic world.