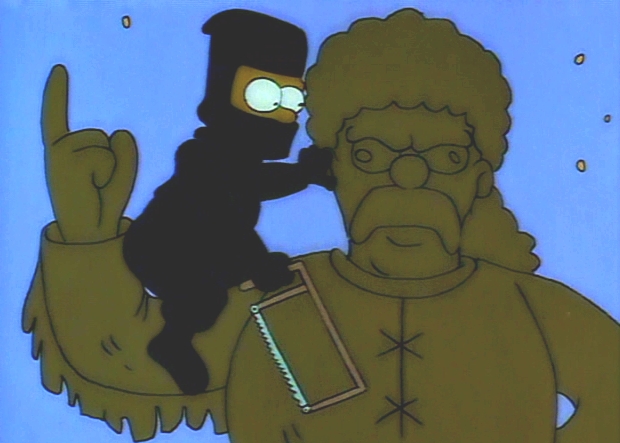 Bart tries to impress the local troublemakers by stealing the statue head of Springfield founder Jebediah Springfield. Told as a flashback as Bart and Homer are surrounded in the town square by an angry mob, Bart implores the mob to listen to his reason behind stealing the head. It all begins with a Sunday morning at church.

The church scene provides a great theological discussion as Bart and the kids grill their Sunday school teacher on who and what will make it into heaven. Apparently ventriloquist dummies and monkeys don’t make the cut but amputated limbs will be restored. Meanwhile, Homer listens to the big football on the radio on the downlow while in church service.

Essentially another episode about Bart being mostly a harmless troublemaker and how he’s egged on by his father’s words being taken out of context, The Telltale Head starts strong with some great opening gags at church and then continues to be a solid episode throughout.

It doesn’t have some of the visual or narrative creativity of the most exemplary episodes but it’s still a solid episode and the flashback structure does make it a bit more interesting than if it was told in a linear fashion. 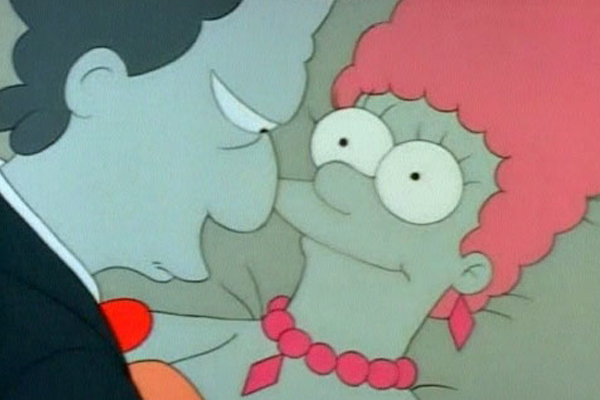 Homer lands himself in the proverbial doghouse when he gets Marge a bowling ball for her birthday with his name inscribed on it. Marge sees it as a backhanded gift Homer is giving to himself and she decides out of spite to learn how to bowl. On the lanes she meets the smooth operator Jacques (Albert Brooks) who begins giving her some pointers in bowling before he makes a move on Marge.

This episode gets a lot of comedic traction out of the juxtaposition of bowling being an extremely unsexy sport and Jacques attempting to use the art of bowling to seduce Marge. The scenario plays itself out in large part because Marge does feel neglected by Homer and soon finds herself accepting an invitation to Jacques’ apartment.

In a delightful animated sequence, Marge imagines Jacques’ apartment after passing out from shock when he invites her over. Marge imagines dancing with him in a room made up of the most absurd bowling theme decorations, playing up the goofiness of a sordid affair begun on the bowling lanes. It once again takes place in black and white, emphasizing the fantasy elements while also hearkening back to a Classic Hollywood style aesthetic.

A solid episode that gives Marge a moment in the spotlight as it becomes about her desires and needs. The only fatal flaw here is that the nature of this being a sitcom means that there’s a rather trite inevitability to this episode and I’m not quite sure Marge or Homer learn anything by the end of this story. 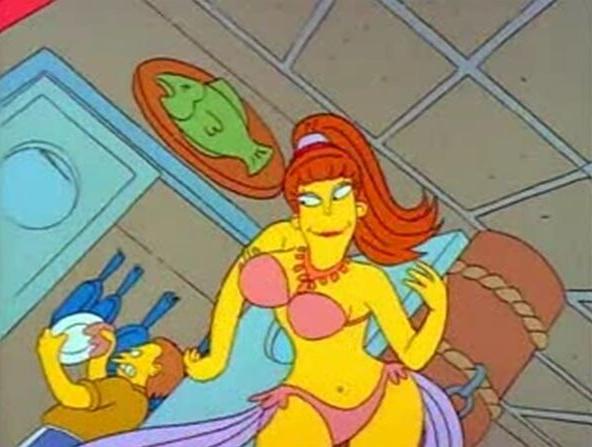 Bart’s new spy camera gets Homer in trouble when Bart stumbles upon a bachelor party and happens to snap a pic of his dad dancing with a belly dancer. At first, Bart only shows the photo to Milhouse but it’s not long before the photo has been shared across the town and Marge comes upon it while at her aerobics class. Marge kicks Homer out of the house and expresses concerns that this behavior will affect Bart’s view of women if he sees his father treating a women as a sex object.

Being the great father that Homer is, his genius idea of reconciliation is to take Bart to meet the belly dancer in question and show Bart that she’s a real person and not just another pretty face, but the plan begins to backfire on him when he accidentally ends up onstage with the dancers and the town eggs him on to repeat his dance performance with the belly dancer.

I’m surprised by how smart and effective this episode is. What could have been an easy way to drum up another conflict between Marge and Homer for an episode becomes a pointed lesson the show demonstrates by the end of its runtime. While Homer didn’t think much of his actions, that behavior did demonstrate something harmful to his son and it’s his job to try to teach him otherwise.

And by the end of the episode, Homer comes to a pretty good solution of how to reconcile the situation and it feels like that both Homer earns back the trust of Marge, teaches Bart a valuable lesson, and that the show has demonstrated that what could have been a cheap gag is actually a learning moment for both the characters and the audience. Great episode. 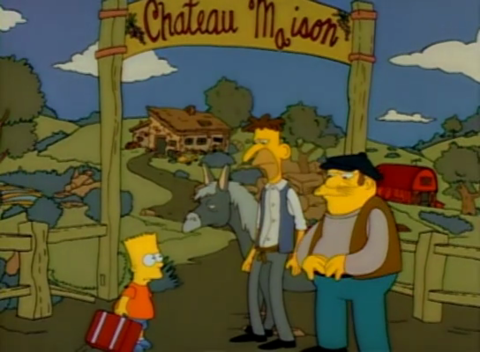 Bart continues to be a troublemaker at home and at school. Homer trips over Bart’s skateboard and suffers a back injury and then Bart drops a cherry bomb in the toilets only to have all the toilets explode when the principal’s mother is in the girl’s room. Frustrated, Principal Skinner proposes Bart take part in an exchange program. Homer agrees and appears delighted with the situation when they get an Albanian child who behaves perfectly.

Meanwhile, Bart finds out the exchange program is a scam when the French “school” he visits turns out to just be a way for a couple of conmen to work a young lad on their vineyard. There’s a lot of setup and plot here, but the humor comes in when the young Albanian child turns out to actually be a secret agent the whole time who is trying to steal nuclear technology from the Americans, making the buffoonish nuclear power plant worker Homer the perfect target.

It’s probably the most complex and narratively satisfying episode of the first season of The Simpsons. The jokes and visual gags aren’t quite as good as other episodes but they come readily enough. It’s also a surprisingly dark episode with Bart basically being a victim of slave labor while Homer becomes a patsy to international espionage.

The ending is a delightful payoff and satisfies both arcs well. Once again, in typical sitcom fashion the show has to find a way to reset everything back to zero so everything is swept up quite nicely but the episode earns its ending. My only question is if Bart speaking French will ever come up again in the show because that could make for some good gags going forward. 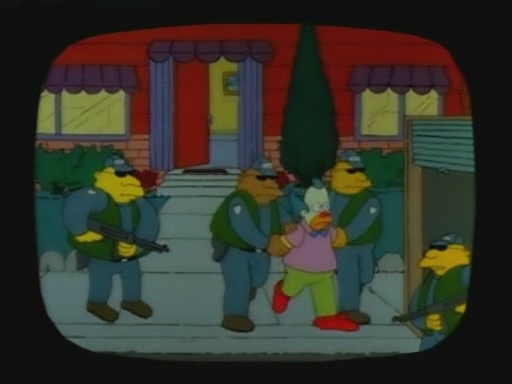 Childhood icon Krusty the Clown becomes the target of criminal allegations when Homer witnesses him robbing the local Kwik-E-Mart. Homer becomes a key witness in the criminal trial, much to the frustration of Bart who believes Krusty is an innocent man. Meanwhile, Krusty’s longtime sidekick Sideshow Bob (Kelsey Grammer) takes over the show and tries to present it as a more high-class educational show. Bart has enough and enlists Lisa to help him clear Krusty’s name.

First of all, this episode is directed by Brad Bird. Yes, the Brad Bird who would later go on to write/direct The Iron Giant, The Incredibles, and Ratatouille. It’s fun to see him working on an early project and while I wouldn’t say you can see the early genius at work here, there are some fun elements such as The Itchy and Scratchy Show and some of the visual jokes.

Second, you’ve got the guest appearance of Kelsey Grammer who is delightful as the longsuffering sidekick turned sophisticated child show host. He’s got that combination of repressed simmering anger and pretentious intellectualism that you’d expect from his turn as Frasier in Cheers and it is integrated seamlessly into the plot of this episode.

The narrative is a clever detective story with Bart and Lisa connecting the dots and following the clues to find out the real perpetrator of the crime. It’s a fun little episode, perhaps the most well-balanced episode between plot and jokes of these early episodes, although not as clever or as dense as the preceding episode. 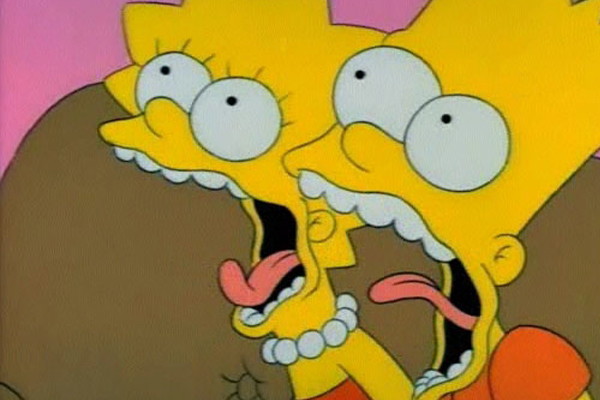 Marge and Homer hit another bump in their relationship when Marge reveals on a call-in therapy radio show that she’s not feeling cared for enough by Homer. Humiliated by the call, Homer hangs out at the bar until some encouragement from the guys motivates him to make things right. Homer whisks Marge away for a romantic evening, leaving the kids with a babysitter under a false name since the local babysitting company has blacklisted them. Little do they know that the woman they leave their kids with is the notorious Babysitter Bandit.

A fun little episode, it deals both with the rockiness of Marge and Homer’s relationship while also providing slapstick hijinks with the children left at the Simpson household with a nefarious criminal. It’s a good balance between the family elements and the cartoon comedy that showcases that some good old cartoon violence can always be good for a laugh or two.

It’s a simple premise well-executed that once again comes together tightly in a delightful ending that plays off of Homer’s consistent ability to completely misread the situation and act hastily based on very little information. Not much more to say about it than that. A solid middle-of-the-pack episode for the first season. 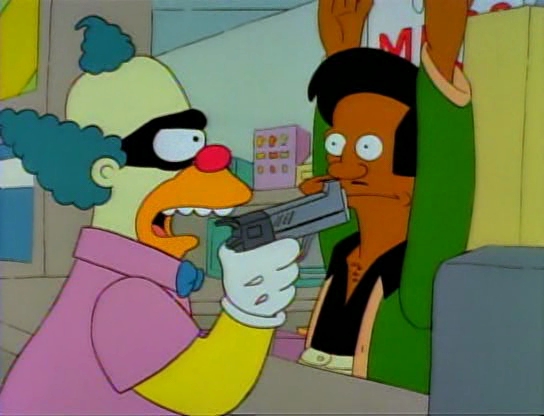 A Note on Apu:

It’s worth addressing The character of Apu in light of the fact he makes his first appearance in The Telltale Head and also appears in Homer’s Night Out and Krusty Gets Busted. Apu is a controversial character in the show because of the fact many believe he perpetuates negative Indian stereotypes. All I’ve seen in these episodes is that he owns a convenience store and as of yet does not seem to have any personality. He’s not given a lot of screentime these early episodes and therefore I don’t yet have an opinion on the actual content of the character.

However, I can say that having a white person voice the thick Indian accent for the character is culturally insensitive at best and racist at worst. I’m sure some will make the argument that it’s of its time or just what people did back then and what I say to that is given that they continued to have him voiced by the same white man up into the year 2020 (last year!) seems to suggest that they’re on the racist end of the spectrum here as they’ve had 30 years of the industry moving towards more inclusive measures to right these wrongs and just doubled down on them instead of doing the bare minimum which would be to hire an Indian voice actor. That’s all I’ll say for now.