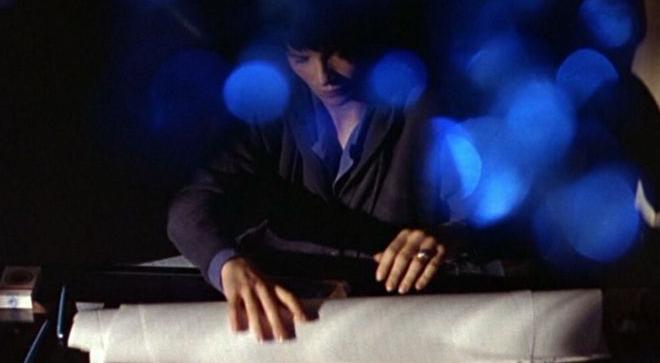 Upon watching the Criterion bluray release of Three Colors: Blue, one of my favorite films and a title I’ve seen many times, I was met with a shocking discovery. The musical finale of the film happened to be from the Bible: 1st Corinthians 13 in the ancient Greek. Besides geeking out over the fact that I recognized some of the actual words (I took ancient Greek in Undergrad), this revelation added an extra layer of dimension and texture to the concluding vignette.

I’ve always held the closing scene of this film as a bit of a mystery, but with the sudden knowledge of what the lyrics meant, I was met with a revelation. Throughout the film, Kieslowski has been exploring a perverse idea of freedom. After Julie (Juliette Binoche) suffers the loss of her husband and daughter, she gains a newfound freedom and decides to break all ties and move off to live on her own in urban seclusion.

However, this new-found freedom becomes perversely selfish and cold. Throughout the film Julie is haunted by this music, the music her husband was composed before her death, the music she will later give the words of 1st Corinthians 13. The instant, overt message is the idea that love is what is most important and that Julie’s freedom has just been an attempt to escape loving others. And while I like that idea, I’m suddenly struck with a new idea.

The entire Three Colors Trilogy is constructed around the three colors of the French flag which represents Liberty, Equality and Fraternity. However, screenwriters Krzysztof Kieslowski and Krzysztof Piesiewicz perverse these values, turn them on their heads and make them negatives, or, at the least, complicate them. What if this culmination into 1st Corinthians 13 in Three Colors: Blue represents an attempt to replace the three French virtues, virtues of a worldly government, with three divine virtues? 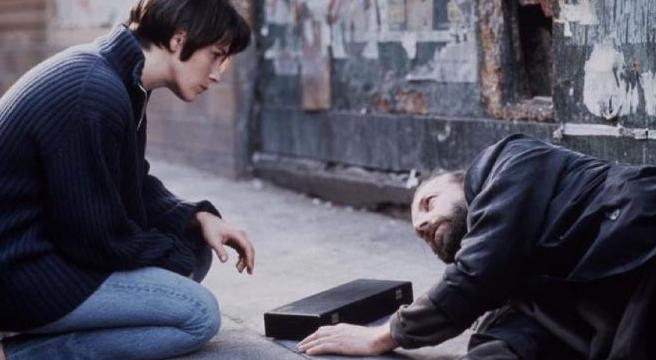 As 1st Corinthians 13:13 says, “[A]nd now abide faith, hope, love, these three; but the greatest of these is love.” What if these three are the virtues Kieslowski is using to replace the French virtues he paints as faulty? Moving forward with this idea, I believe we can track the positive manifestation of these virtues throughout the trilogy.

In Blue, one of the recurring images is bungie jumping which can see as a symbolic expression of the idea of taking a leap of faith. In one scene where this symbol is evoked, Julie says to her-self, “Now I have only one thing left to do: nothing. I don’t want any belongings, any memories. No friends, no love. Those are all traps.”

Julie is a character who has lost faith in living. She has moved away from her past, literally, and now lives alone with no friends, no longer having the faith that those relationships will be meaningful. However, she has not lost all faith. She still clings to the blue beads from her daughter’s room and her husband’s music still haunts her memories. While she does her best to repress these ruminates of her past, they cannot be stifled.

Therefore, the conclusion of the film is an amalgamation of images making up the various characters Julie has come into contact with throughout the film. This montage builds to a glimpse into Julie’s eye, suggesting that all these characters are now inside Julie once again and that her faith has been renewed, that she’s able to take that leap into having human relationships and messy emotions once more. 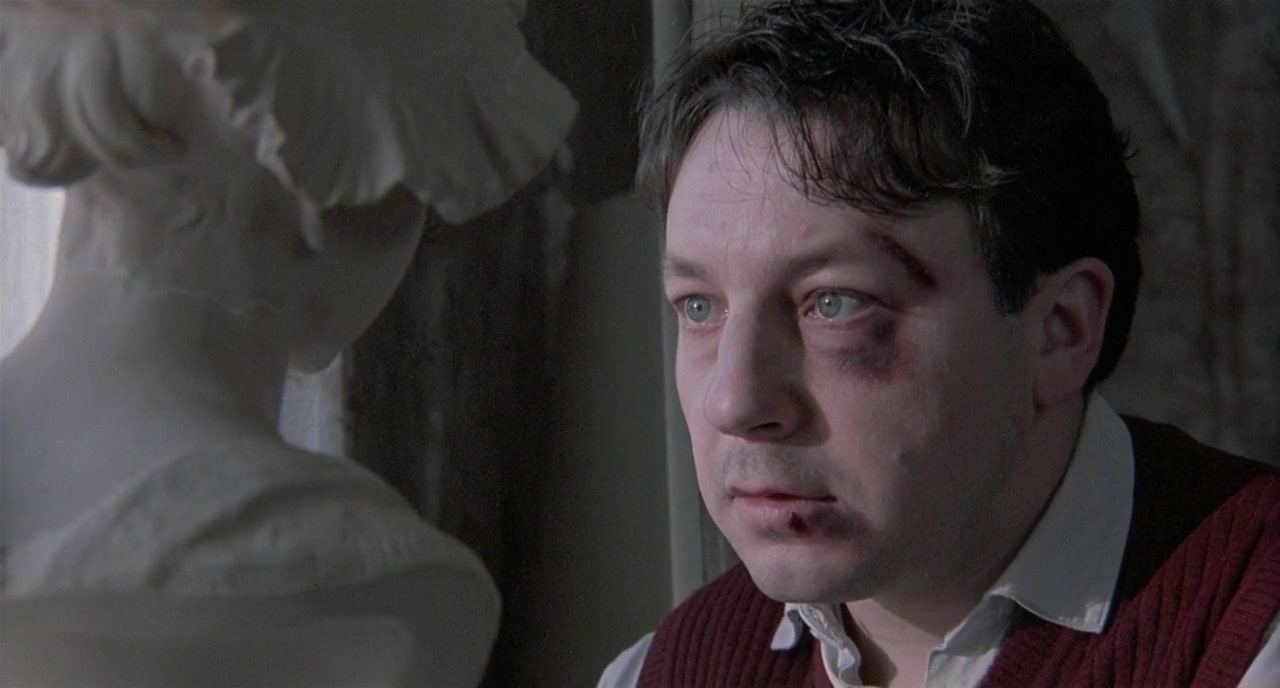 While White is bookended by two revenge plots revolving around the divorce of Karol (Zbigniew Zamachowski) and Dominique (Julie Delpy), I’d argue the core of the film is Karol’s relationship with Mikolaj (Janusz Gajos), a fellow countryman who offers him a job which involves helping a man commit suicide. This man turns out to be Mikolaj himself and Karol decides instead of killing him to give him a newfound goal in life.

The two friends get drunk and slide across the frozen river whooping with glee and laughing at their childish behavior. And as Mikolaj lies on the ice, catching his breath in-between whips of exhalation, he says “I feel like a child again. Anything is possible.” Karol is a character who through his own perpetual hopefulness spreads hope to others. After Karol uses the money from Mikolaj’s job to start a business, he makes Mijolaj a partner in his business, giving him a new goal in life.

Likewise, Karol’s elaborate revenge on his wife actually instills hope that the might be united once again. For the first time in the film, Dominique becomes kind and pleasant to Karol. And, as the end of the entire trilogy gives is insight into, the two actually do end up back together. 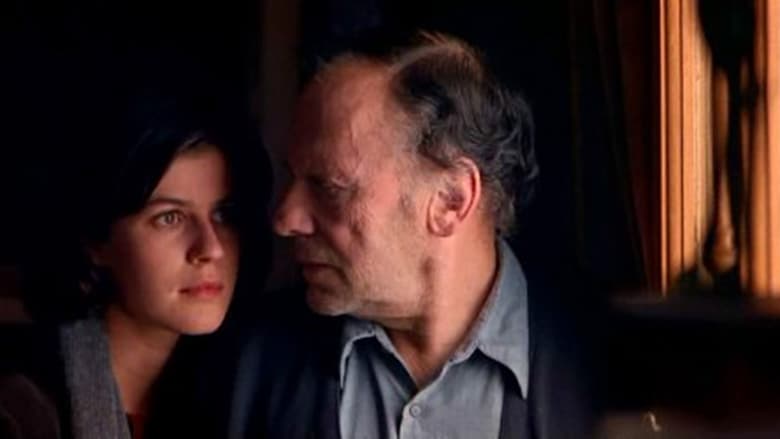 It’s in Red where the demonstration of love begins to emerge as the clear, concluding virtue of the trilogy. When talking about love, it is important to recognize that the love the passage in 1st Corinthians is talking about is not the catch-all word used in the English but, ἀγάπη (agape). The word agape in this context refers to the idea of charity, a selfless love.

Red evokes this love of charity in the relationship between Valentine (Irène Jacob) and the Judge (Jean-Louis Trintignant).Valentine meets the Judge after she accidentally hits his dog, Rita. While initially the idea of charity might be seen in the fact Valentine takes Rita in after the Judge seems disinterested in her well-being, the film complicates this idea of charity, suggesting Valentine takes in the dog to make up for the guilt she feels.

Real agape happens in a moment like when Valentine helps the old lady put her bottle into the recycling cylinder. It’s an act in which Valentine will gain nothing, a pure act of charity. Likewise, as the relationship between Valentine and the Judge grow, their friendship becomes more that the affectionate phillia in the Greek, but a deep, selfless interest in each other’s well-being. Valentine supports the Judge even as he works through the dark secret of his life and in turn the Judge seeks to set Valentine on the path through life he missed out on during his youth.

But the final act of agape, the love of charity, in the film is a divine act. The film concludes as the only survivors of a ferry accident are brought ashore. Six of the seven survivors are the key characters of the three films in the trilogy brought together and protected in what seems almost like chance. However, I would argue it’s a divine external act of love by the screenwriters for these characters, Kieslowski’s final expression of agape towards his characters.